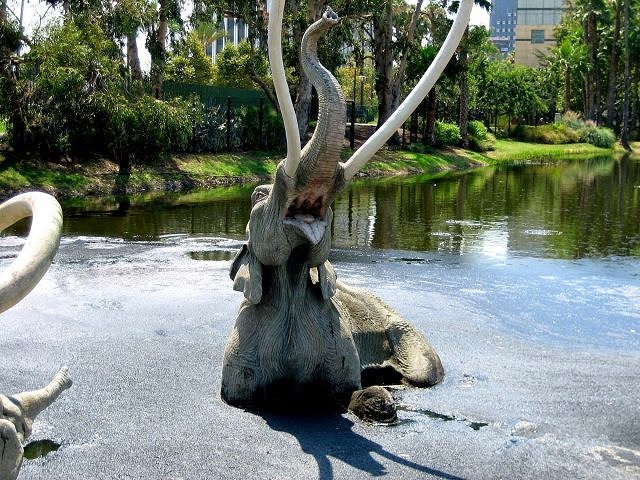 Nothing slows down a novel quite like large mounds of exposition and backstory. Expositionis material the author puts on the page to explain context. Backstory is story material that happened in the past but for some authorial reason is dropped in the present. When this kind of material appears in the middle of a scene it can slow the pace, sort of like a Mastodon trying to escape a hungry caveman by way of the tar pits.
Now, let me be clear that not all exposition and backstory is bad. In fact, properly handled, it’s tremendously helpful for bonding reader with character. But if it’s plopped down in large doses, and without a strategy in mind, it becomes a pool of hot goo where the story gets pitifully stuck.
Here is how to handle exposition and backstory, especially at the beginning.
First, ask yourself is it necessary at all? Quite often the writer has all this story info in his head and thinks the reader has to know most of it to understand what’s going on. Not so! Readers get into story by way of characters facing challenge, conflict, change or trouble. If you give them that, they will wait a LONG TIME before wanting to know more whys and wherefores.
You can do yourself a favor by highlighting the exposition and backstory in your opening chapters and then cutting all of it. Make a copy of the material. Look it over. Then dribble in only what is necessary. And I do mean necessary. Be ruthless in deciding what a reader has to know, as opposed to what you think they have to know.
Second, put a lot of this material in dialogue. Dialogue is your best friend. Make sure there is some form of tension or conflict in the dialogue, even if it is simply one character feeling fearful or nervous. Arguments are especially good for exposition and backstory. Recently I watched the Woody Allen film Blue Jasmine, and nodded approvingly at an early scene between Augie (Andrew Dice Clay) and his ex-wife, Ginger (Sally Hawkins). They’re arguing about Ginger’s sister, who calls herself Jasmine. A lot of background is revealed in this exchange:
“What’s the rush, Ginger? You got a date?”

“It’s none of your business. It happens to be Jeanette, so…”
“Jeanette?”
“Jasmine.”
“What’s she doing in town?”
“She’s living with me till she gets back on her feet. She’s had a bad time.”
“When she had money she wanted nothing to do with you. Now that she’s broke, she’s moving in.”
“She’s not just broke, she’s screwed up. And it’s none of your damn business. She’s family.”
“She stole our money.”
“Okay!”
“Understand? We coulda been set. That was our whole chance in life.”
“For the last time, Augie, he was the crook, not her, okay? What the hell did she know about finance?”
“Don’t stand there and tell me that. She’s married to a guy for years, up to his ass in phony real estate and bank fraud. She knew nothing about it? Believe me, she knew, Ginger.”
Third: Act first, explain later. Stamp this axiom on your writer’s brain. Or put it on a note and tape it where you can see it. This advice never fails.
Let’s have a look at the opening of one of Robert B. Parker’s Jesse Stone novels, Stranger in Paradise:
Molly Crane stuck her head in the doorway to Jesse’s office.
“Man here to see you,” she said. “Says his name’s Wilson Cromartie.”
Jesse looked up. His eyes met Molly’s. Neither of them said anything. Then Jesse stood. His gun was in its holster on the file cabinet behind him. He took the gun from the holster and sat back down and put the gun in the top right-hand drawer of his desk and left the drawer open.
“Show him in,” Jesse said.
As we will find out, Jesse Stone knows this Cromartie very well. He’s called “Crow,” and he’s a Native American hit man. There is lots of backstory between Jesse and Crow. But Parker doesn’t reveal any of yet.
What he does instead is show Jesse getting his gun ready. That’s intriguing. He knows something about this man after all, and it requires his gun being ready. Act first, explain later. The scene continues:
Molly went and in a moment returned with the man.
Jesse nodded his head.
“Crow,” he said.
“Jesse Stone,” Crow said.
Jesse pointed to a chair. Crow sat. He looked at the file cabinet.
“Empty holster,” he said.
“Gun’s in my desk drawer,” Jesse said.
“And the drawer’s open,” Crow said.
“Uh-huh.”
We now know that this Crow is someone who notices things, especially when it comes to guns. What kind of person is that? We don’t know and Parker isn’t telling us. We only know this guy is probably dangerous. This is not friendly small talk. The air is crackling with potential trouble.
Half a page later, we get this:
“Last time I saw you was in a speedboat dashing off with a lot of money,” Jesse said.
“Long time back,” Crow said. “Longer than the statute of limitations.”
“I’d have to check,” Jesse said.
“I did,” Crow said. “Ten years.”
“Not for murder,” Jesse said.
“You got no evidence I had anything to do with murder.”
Boom. Now we get backstory information, but notice where it is. In dialogue! And that, indeed, is how Parker delivers almost all the essential information in this novel.
Of course, Parker is writing in a particular, stripped-down style. But the principles he uses will serve you as well.
It may be your choice to render some backstory in narrative form. If you do, let me give you a rule of thumb (not the same as an unbreakable rule!) that I’ve given to many students with good results: in your first ten pages you can have three sentences of backstory, used all at once or spread out. In your second ten pages you can have three paragraphs of backstory, used all at once or spread out. But if you put backstory or exposition into dialogue, then you’re free to use your own discretion. Just be sure the dialogue is truly what the characters would say and doesn’t come of as a none-too-clever info dump (I explain more about this in my book, How to Write Dazzling Dialogue.)
We place a lot of emphasis here at TKZ on sharp, intriguing openings. For good reason. That’s what editors, agents and browsing readers look at first. We don’t want to leave them in the tar pits—we want them to keep on reading!

These tips will keep you out of the goo.

32 thoughts on “Avoiding the Tar Pits of Fiction”