There are writers who write only for money. There’s nothing illegal about that. Indeed, I strongly believe in writers making dough.
There are other writers who write primarily for artistic expression, and don’t seem to care about money at all. That’s not illegal, either.
And then there are writers who write as a source of income but sometimes just want to write something for love of the writing itself, even if it’s not going to generate revenue.
That’s how I would describe my new short story, “Golden.” 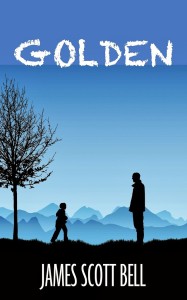 This story is different from my other work. It’s not a genre piece. Let me explain.
I admire great short-story writers, because the form is so challenging. Among my favorites are Hemingway, Saroyan, Irwin Shaw and John D. MacDonald.
The latter author is not usually thought of as a short-story writer. He’s best known for his brilliant Travis McGeeseries.
But I contend that MacDonald was one of America’s great literary talents. That he chose pulp and paperback originals for most of his work had to do with his need to make a living as a writer, and fast, after World War II.
I have an extensive MacDonald collection. A few weeks ago I pulled off the shelf his volume of literary-style short stories, The End of the Tiger. I turned to a story I’d not read before, “The Bear Trap.” A man is on a road trip with his wife and children. When they stop at an isolated gas station a seemingly innocuous event triggers a memory in the man. His “shattering moment” comes back to invade his present. It tells us about who this man really is and, in the way of great short stories, something about ourselves.
It reminded me, once again, that a great short story can have an emotional resonance as powerful as a novel. I still remember the strong emotions I felt after finishing stories like “Hills Like White Elephants” and “The Short Happy Life of Francis Macomber” (Hemingway); “The Daring Young Man on the Flying Trapeze” and “A Word to Scoffers” (Saroyan); “The Girls in Their Summer Dresses” and “The 80-Yard Run” (Irwin Shaw); “Where Are You Going, Where Have You Been?” (Joyce Carol Oates); “Will You Please Be Quiet, Please?” (Raymond Carver).
And speaking of Carver, many of you know I got to be in a workshop with him when he taught for a time at U.C. Santa Barbara. What I recall most is that I couldn’t do what he did. Or what some of the “star students” in the class were doing. And no one was able to teach me. I felt like a failure, like I didn’t have any true literary talent at all.
It took me years to discover you could actually learn the craft. I’ve also written about how I came out of the movie Moonstruck wanting (needing, really) to write something that would make others feel the way I felt just then.
A similar feeling overtook me when I finished the MacDonald story.
So I wrote “Golden.”
I have no idea if it’s any great shakes. I feel a little of the old knee knocking I experienced in that classroom with Raymond Carver.
But maybe that’s a good thing. If your knees aren’t knocking on occasion, maybe you’re not stretching enough as a writer.
Maybe you’re not risking love.
So what about you? Do you write for love, for money, or some combination of both?