I don’t think you can write a great novel, even with a high concept and cool characters, unless you, the author, are emotional about it. If the story doesn’t grip your own heart and soul, how will it grab the readers? Without some emotional connection, the writing will too easily become paint-by-the-numbers.
Emotion in the author is literary electricity. It’s the X Factor, the game changer, the “second level of sell.” Readers sense it.
So how do you find the emotions?  One method I suggest comes from my days as an actor. We used to do “sense memory” exercises in class. This involves going back to your past, finding an emotional moment, and reliving it by recalling all the senses of the scene. You re-experience the moment. You feel it happening all over again. You then transfer that into your role.
There’s a similar method for fiction. I used it to launch into writing my newly released thriller, DON’T LEAVE ME 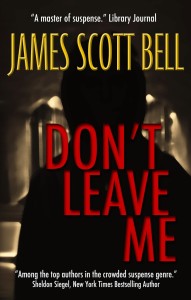 Here’s how it happened. I wanted to write a thriller about a good man who gets caught up in extraordinary and dangerous circumstances (a Hitchcock staple). I wanted a plot that makes readers go What? then Oh no! then Look out! and I didn’t see that coming!
I fleshed out a possible lead character and opening. A former Navy chaplain, Chuck Samson, is back from Afghanistan with a rare form of PTSD, and needs time to heal. He has an innocuous rear end accident one morning. But the guy he hits pulls a knife and threatens to kill him. A good Samaritan stops to help. The knife guy rolls away. And thirty seconds later Chuck gets a phone call warning him not say anything about what just happened or he’ll die. Just like his wife . . .
I liked it. But I knew I needed to feelthe material before I started investing more time. So I started to think about something I teach in my workshops: the “care package.” Who could Chuck be caring about before the story begins? I went through several possibilities, and then one day I went into my local Ralphs market and was met at the door by a friendly, developmentally challenged man whose job it was to greet customers and hand them an ad sheet with the daily specials. And immediately I thought, What if this was Chuck’s brother?
And so the character of Stan Samson was born. An adult with autism, friendly and funny. What if the bad guys after Chuck go after his brother, too?
The emotional pull started to hit me, because I went back to my own childhood, and the time my big brother saved me from a couple of bullies.
I was playing on a hill near our house when two “big kids” caught me and sat me down in front of some kind of big, block battery. They said if I tried to get away, they’d electrocute me to death. I was maybe six or seven, and I was scared out of my mind. They started talking about the things they were going to do to me. Making me squirm. When the terror got to be too great I made a break for it. I jumped up and ran faster than I ever had in my life. I did not look back. I ran the half mile back to my house, burst through the door, and almost knocked over my big brother, Bob.
He knew something was wrong. Between sobs and catching my breath, I told him what happened. He got this look in his eyes. He said, “You wait here.” And he went out the front door.
I never saw those kids in our neighborhood again.
And I remember the security I felt whenever Bob and my other big brother, Tim, were around.
I transferred that feeling to Stan. How it made him feel when Chuck was around to protect him. Which is why, when the bullies came for him as a kid, Stan told Chuck, “Don’t leave me!” And why, when the bad guys come in this story, he says the same thing.
Thus came the title, and the emotion for my novel. And a tag line:
When they came for him it was time to run. When they came for his brother it was time to fight.
I hope you’ll give DON’T LEAVE ME a read. It’s available here:
AMAZON
AMAZON UK
B & N
KOBO
So what about you? Do you connect to your stories emotionally? How do you do it?

28 thoughts on “How To Get Emotional About Your Novel”