Skip to primary content
James Scott Bell
@jamesscottbell
One of the joys of mentoring and teaching at writers’ conferences is coming across that “thing” all agents and publishers say they want: a fresh voice. They saythat, but there’s always an unspoken undertone—they also want to be able to convince the marketing squad they can sell that voice.
So what to do with a voice like Cheri Williams? In the mentoring group I led at the Mount Hermon Christian Writers Conference some years ago, Cheri’s work stood out. It was quirky, laugh-out-loud funny, stylistically innovative and a bit (sometimes more than a bit) off-center. Cheri does not go for safety.
It’s that off-center thing that became a bit of a hindrance in Cheri’s seeking a publishing contract. Personally, I think several publishers missed the boat. I understand risk aversion in major industry, but there’s also something to be said for reaching out, taking a chance and perhaps snagging the next big thing.
Be that as it may, along came the digital revolution and self-publishing. All of a sudden, the highly original voice has a place to go.
So when Cheri decided to self-publish How to Castrate Your Man in 7 Simple Steps, I thought a little interview might be in order. I started by asking why she jumped on board the indie train.
“Why did I decide to self-publish? Um… have you read my title? Seen my cover?! Okay, okay. There’s a little more to it than that, but both are actually pretty big parts of the equation. I had this piece I’d written, ‘How to Castrate Your Man in 7 Simple Steps—No Pruning Shears Required.’ A must-read if there ever was one, right? The biggest Christian magazine thought so. They bought the article on the spot—then bumped it. I’d hand-selected the editor, knew there was no way any other publisher in the western hemisphere would touch it. In case you’re unaware, castration is not typically a Biblical tenet—until now muahahaha. That’s right, in less that 1300 words I prove it: it’s practically a biblical mandate.”
I paused for a drink of water and to wipe the sweat off my brow.
“Well, ‘Castrate’ kept resurfacing in my writing career. Buoyant little essay that it is, it kept popping up in conversations everywhere. Over time I realized how much it meant to me, how much I wanted it to mean something to others. I got to digging around on my hard drive and realized I’d written several more pieces that mattered. Other unpublishables like ‘How to Turn Your Woman into the Inflate-a-Mate of your Dreams’ and ‘Get Naked With God—Bring Your Own Soap.’”
I paused again, went outside for a breath of air, then continued the interview.
“My question soon became: Why not publish them myself? An aside: James Scott Bell is the world’s greatest writing teacher. But he’s more than that—he’s a true mentor (I’m also convinced that somewhere between acting and attorneying he did a cheerleading stint, but that’s another blog post). Around the same time I noodled the afore-mentioned question, Jim released Self-Publishing Attack! The 5 Absolutely Unbreakable Laws for Creating Steady Income Publishing Your Own Books. Imagine my delight when I read (my paraphrasing) start small, test the waters, you have nothing to lose and much to gain. The best marketing method? A kick-booty book.”
I slipped her a fiver for the kind words, but also mentioned that I have never in my life used the term kick-booty. Cheri said she would not hold that against me. I breathed a sigh of relief, having just seen her cover. 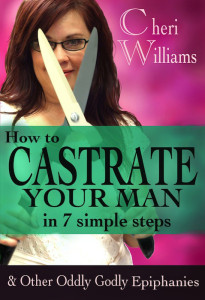 “Am I glad I decided to self-publish? Yes, I am. Have I abandoned traditional publication? No, I haven’t. I wrote pieces that didn’t fit neatly into any genre, wouldn’t sit sweetly in any publisher’s catalog. But they’re pieces that matter to me. Pieces I’m willing to work hard for. Pieces that keep me up nights perfecting them to the best of my ability (and those of everyone I know). I realized if I didn’t publish these essays myself, I’d never know if there’s a audience for them, an audience for this part of my heart. And I want to know—because there are a whole lot more Oddly Godly Epiphanies I’d love to inflict upon the world. Er… I mean… share. Self-publication was the right path for these pieces.”
Cheri also writes killer fiction for teens. “You know, the kind filled with love, lust, and lots of dead bodies. Those, I still believe, are better suited to traditional publishing. But who knows?”
No one knows, that’s who. No one knows what’s going to work in the trad world or the indie world. But for voices like Cheri’s there is now a way to find out.
“Bottom line: Was my book good enough? Would people think it’s funny? Moving? Matter to them like it matters to me? Make any difference at all? For a completely neurotic writer such as myself, those are tough questions to answer with a big fat Yes. In fact, the more I thought about it, the more I realized they can’t be. I couldn’t possibly know in advance if readers would take to my writing. But wait…Castrate had been critiqued by some of the best writers I knew, they said it’d brought on many a snort fest and even a few changed hearts. Once upon a time, it was bought by an uber-awesome editor! Were those things enough confirmation to take on the enormity of self-publishing? For me they were.”
For more on the oddly godly Cheri Williams, visit her website. And watch your back.
So do you agree? Isn’t self-publishing the greatest boon in history for the original voice? In fact, this is where publishers are going fishing for the “next big thing.” So why not stock the pond with your material?

16 thoughts on “Self Publishing And Original Voices”