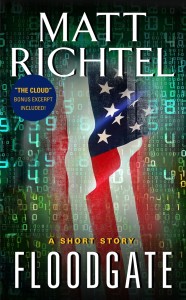 Today Pulitzer prize winning journalist Matt Richtel join us again for a fascinating real life story…read on to find out more…
It was one of those arid summer days where you can see heat rippling from the pavement. Air conditioning in the cranky Chevrolet up full blast. Kermit and the Muppets on the stereo singing about a rainbow.
And then the black car appeared. A Mercedes, tinted windows. One curve ahead of us. My father, driving, spied it first.
“It’s him.”
Strapped into the backseat, a determined 14-year-old, I strained to look over the tall gray back of the front seat.
“It’s him, Matthew. It’s Carlos.”
The Jackal.
“No way.” I paused. “Do you think he’s on to us?”
It was the summer of 1980. We were on a family car trip; me, dad, my younger sister and mom. I tell you the beginning of this all-too-true story to address the question: do thriller writers get born, or made? Do we start seeing conspiracy everywhere, imposing over-active imaginations, like covering the world with a transparency dotted with daggers and police tape?
That summer, I was traveling with Robert Ludlum, or, rather, his book, the Bourne Identity, one of the first hardbacks I mainlined, just after dad finished it. Carlos the Jackal, terrorist and Ludlum antagonist, had crept into our zealous imaginations.
Maybe dad was escaping a little bit too, maybe we all were. Mom and dad hadn’t been getting along so great. Nothing overt. A tear in the fabric.
With the Mercedes just ahead of us, we reached our destination, a local steakhouse at the top of a small hill. Dad and I were still in the thrall of imagination – is it Carlos in the car? Headed to an assassination? One we can prevent? — when out of the black car stepped three men.
Dark jackets, short haircuts. Stern. One wore a single black glove.
“Oh my God, Matthew. It’s really him.”
Unlike some people who write for a living, I never pictured myself becoming a writer. I knew I liked being swept away, teased by the promise of some terrific answer. But even after I became a journalist, I thought the idea of writing books seemed ambitious bordering on obnoxious. Who writes 90,000 words about anything?
Then, in 2002, processing the end of a long relationship with my college girlfriend, I wrote two pages of a story that starts with an explosion at a San Francisco café, in which the protagonist is saved by a beautiful and mysterious woman. Who is this woman, I had to know. Five months, and 90,000 words, later, my first thriller, Hooked.
I couldn’t stop writing. My third thriller, The Cloud, comes out in January. This week marked the release of my first short-story, Floodgate. It’s had me thinking about my chronic case of the muse. I fear my publisher, Harper Collins, will find out: He’ll do it for free!
Is there a connection between the story of the Man With One Black Glove (stay tuned for the surprise ending) and the muse that haunts me?
Almost certainly. But not for the most obvious reason: that I learned some form of escape. That retreating into a fantasy was easier than, say, thinking about parents not getting along (they eventually, amicably, divorced) or directly processing the end of my relationship with a girlfriend. That may be part of it but not the lion’s share.
The biggie, for me, is that I was given permission. Permission to fantasize, tell stories, let my mind wander. My father facilitated that through his own playfulness, through the spy novels he read, the upholding of men and women of glory. My mother did so through her own love affair with fiction, character-based stories, novels, literary and close to it.
My folks didn’t read the same books but they read and read and put spines on a pedestal.
For many years, I didn’t give myself the permission they’d gifted me. I suspect I went into journalism because it let me write, but not whimsically; I wrote about ideas, “important” things. Then, as I got more comfortable with myself, I started hearing something. A voice. It would say: what if.
What if the café exploded? What if grandma knows a secret? What if they’re watching us?
I started to mix the maturity of a seasoned journalist, someone who had learned to knit a narrative, with the whimsy of a child? I got the hell out of my own way. I am rarely more peaceful than asking:
What if?
What if the clown is packing? What if a note falls from his pocket? What if that man with one black glove is Carlos?
The story did not ending the parking lot.
That balmy night on the car trip, we walked inside the restaurant. The three men were seated at a table in the middle. We got sat two tables away. Dad and I trying not to stare, staring. Overhearing.
“They’re talking in a foreign language,” I gasped and whispered.
My dad: “It’s German.”
I am not kidding you.
Oh, by this point, things go crazy inside our brains, and also get a bit conflated. Carlos the Jackal was, we think, Spanish. But these guys were German, which is, we decided, even crazier. Nazis, on our soil! We had to slightly redo the plot; who cared, it didn’t really matter. Sometimes easy resolutions and explanations fail you. Especially in thrillers. But sometimes, if the setup is great, if you ask the right questions, it doesn’t matter. The payoff is the telling.

8 thoughts on “Who Created Writers? The Man With One Black Glove”