I am still chuckling over this delightful submission. It felt like a cross between Janet Evanovich’s Stephanie Plum (a guy version) and a lite tongue-in-cheek rendition of Robert Crais’s Elvis Cole. (Elvis has some pretty funny schtick.) See you on the flip side for my critique and I would love to hear what you think too, TKZers. 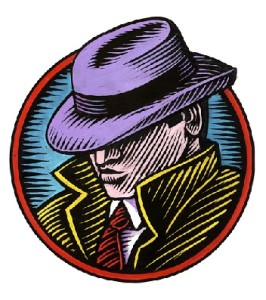 SHOPPING CAN BE DEADLY
Detective Rule #13: Treat every case like it’s your first case, especially if it is.
I checked my watch and then the wet windshield.  A twenty-eight-year-old vivacious woman crossed the street.  She was my client, Mrs. Ellen Donefield.   Eleven o’clock and she was right on time.  Her ash blonde hair was covered by a red scarf, her highly pilates-ized body was covered with St. Somebody’s fashions and her back was covered by me, Guy Graff, a twenty-seven year old private investigator on his first case.

Yesterday, in my office she told me that for the past two weeks she had been followed while shopping in Beverly Hills and hired me to find out who it was.  She didn’t feel threatened but she wanted him stopped.

The expensive streets in Beverly Hills were filled with bustle and haste on this Valentine’s Day buying posh presents and keeping out of the rain.  I got out of my ’94 Tercel and glanced around the soaked street.  I wasn’t the only one watching my client.  A dark haired man, with a deep tan and dressed in a brown plaid suit fit Mrs. Donefield’s description.   And yes, he was definitely watching that body too.  I felt professional, finding my man right away.

Mr. Plaid looked directly at me, checked his watch, then turned his gaze back to Juicy Couture the boutique Mrs. Donefield had just entered.  I knew this guy had no idea of who I was but to look inconspicuous, I also looked at my watch and tapped my foot as if waiting for my girlfriend.  Little did he know Janice broke up with me two months ago.  She didn’t believe my new business venture would generate a large income.  So far, she was right.

Mrs. Donefield emerged from the store after a few minutes of shopping.  I watched her out of the corner of my eye.  Too busy waiting for my pretend girlfriend, I didn’t notice that the Mr. Plaid was gone.

Detective Rule #3:  You can lose a sock when doing laundry but don’t lose the guy stalking your client.

Okay, by the end of this book, I can see the author doing an anthology on all the “Guy” rules, the “World according to Graff.” All anyone would need is a Craig’s list ad and they’d be in the PI business. This has a classic PI feel to it, but it’s updated with the appealing wit of the author. I definitely want to read more of this story.

The first line pulled me out a little. “I checked my watch and then the wet windshield.” The wet windshield might be a way for the author to comment on the weather, but it struck me as odd that anyone watching a vivacious woman (and client) would notice the drops of rain on the windshield, especially on their first case.

In the first paragraph, the words “on his first case” are redundant after the very funny Rule #13. I’m sure this clever author can think of many ways to get this across another way, like “a twenty-seven year old private investigator with a newly minted license with the ink still wet and a week old ad on Craig’s list.”

“…her highly pilates-ized body was covered with St. Somebody’s fashions and her back was covered by me, Guy Graff…” This is a very funny way to introduce the first person POV character, without the reader waiting too long to know who the voice is. (I love the character name too.)

This sentence should be broken apart or revised since the subject—streets—cannot buy posh gifts. “The expensive streets in Beverly Hills were filled with bustle and haste on this Valentine’s Day buying posh presents and keeping out of the rain.” The streets can be filled with bustle and haste (I like that description), but a secondary subject needs to be added to make this grammatically correct. Also, the word “expensive” when describing the word “streets” is a miss for me too. The “shops” are expensive, unless streets in Beverly Hills are made of gold, which they might be.

“Little did he know Janice broke up with me two months ago.  She didn’t believe my new business venture would generate a large income.  So far, she was right.” This little aside by Guy is so funny. The author jabs in a touch of back story, but does it with humor that also reflects on Guy. He thinks he’s being clever with his toe tapping “technique.” I love this.

The way this submission ended is priceless too. “Too busy waiting for my pretend girlfriend, I didn’t notice that the Mr. Plaid was gone.  Detective Rule #3:  You can lose a sock when doing laundry but don’t lose the guy stalking your client.” I love how the author spells out Rule #3 by starting with losing a sock in the laundry. This not only makes the character very relatable, but it endears him to the reader as well.

Summary – First person POV works so well in this story. It’s classic PI, but the humor of this character shines through and the reader will want to stay in his head, especially if the funny rule making descriptions continue. It’s like Guy is making stuff up as he goes and these rules will come more from his mistakes than his successes. Each thought feels as if it comes straight out of Guy’s head and that not only reflects on what’s happening, but each line also shows his self-deprecating humor, his opinion of his surroundings, and his nature.

Whoever wrote this, thanks for the laugh and I wish you well! Great stuff. What did you think, TKZ?

16 thoughts on “First Page Critique: Shopping Can Be Deadly (& Fun)”