Skip to primary content
James Scott Bell
Twitter.com/jamesscottbell
It’s being said all over the place that the new “gatekeepers” in publishing are the readers. Because of self-publishing, and new initiatives by traditional publishers to go direct to readers via revamped websites, that certainly seems to be the case.
So I have decided to put it to the test by letting readers decide if a new idea of mine will become a series.
About a year ago my son laughingly offered me an idea. He loves to make up titles and concepts, just for fun. “Hey Pop,” he said, “how about a thriller about a nun who is secretly a vigilante? She knows martial arts, and can kick butt when necessary?”
I looked at him quizzically, and then he gave me the (you’ll pardon the expression) kicker: “You can call it FORCE OF HABIT.”
I cracked up. So did he. But he stopped when I said, “I think I’ll do it.”
“I was only kidding,” he said.
“It’s a great concept,” I said. “Original, great title, and I think I can do something with it.”
What I did was start to write it. On the side, as I had traditional contracts to fulfill. But as I played with this story, I got pulled more and more into it.
My martial arts nun I named Sister Justicia Marie (or Sister J, as she’s known by those close to her). I thought up her backstory. She is a former child star who grew up into a drug-using actress who then hit bottom. That’s when she turned her life over to God and entered into the sacred life.
But during her time before the cameras, she studied martial arts (particularly for a Steven Seagal film she was in) and those skills have not left her.
And as I like to dig into themes in my books, I thought this raised a most intriguing question: could a devout nun actually justify violence if it was in the course of doing good, like stopping violent criminals?
When a cop asks her the same question, I heard her say this about the criminal element: “They are the knuckles. I am the ruler.”
I started adding a cast of characters. And then I thought of plotlines, and the idea of a series started to unfold. These would be in novelette form, around 15k words each. I think that’s a good pulp fiction value for the reading dollar.
I even went so far as to commission a talented young artist to do a series logo for me, a nun issuing a flying kick. And then the pitch:
When a nun is viciously attacked, Sister Justicia Marie takes it upon herself to find out what happened. The cops don’t like that. Neither does her Mother Superior at St. Cecelia’s school. But when a couple of hoods try to stick up a liquor store and Sister J brings them down, something is unleashed inside her, something that will either confirm her calling . . . or destroy it.
So now here it is. For KINDLE and NOOK, the first of the Rogue Nuns series featuring Sister Justicia Marie: 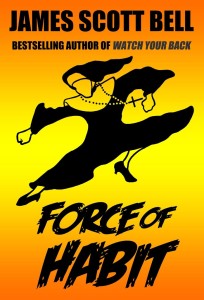 Here is my request: I’m asking you, the, readers to decide if the series will go on. By reading FORCE OF HABIT, and offering reviews, you will help me make the decision whether to continue.
In this case, you are indeed the gatekeepers and the decision makers. So let me hear from you. Thanks!

28 thoughts on “I Am Going to Let the Readers Decide”