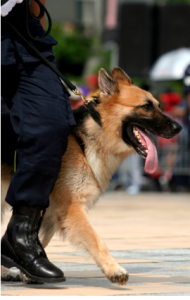 As a writer, I’ll admit it–I don’t get out much. My days mostly revolve around my laptop, the dog park, and reruns of K9 Cops on Animal Planet.

So whenever something mildly interesting does happen, I run with it. Like last week. A guy driving an over-sized pickup ran into a parked SUV at the dog park, whacking off a good-sized chunk of fender. I left to find the SUV’s owner, while the pickup driver sought a pen and paper from other bystanders.

I returned with the SUV’s owner, and discovered that the guy in the pickup had taken off without leaving a note. It was a hit and run. A young girl, a budding Nancy Drew type, had had the presence of mind to jot down the pickup’s license plate. The police had already been called.

I had actually recognized the guy’s face, so I stayed while the police arrived and took statements. When it was my turn, I gave a detailed description of the pickup driver. Unfortunately, I didn’t know his name. “But his dog is a white German Shepherd named Freedom,” I added helpfully. I kept referring to “we” as I described what had happened.

“Who was with you at the time?” the patrolman asked.

“I wonder if I should write that down,” he said, looking like he was trying not to smile.

From that day on, every time I went to the dog park, I was on high alert. I was determined to spot the pickup driver, just in case he tried to sneak in his white Shepherd for a game of fetch without being caught.

Two weeks later, I saw him. He was lounging by the fence, chatting up the owner of a Great Dane like he had nada a care in the world.

I leashed McGregor, stole back to the parking lot, and located the pickup. After a brief struggle over the morality of turning snitch, I called 911. I gave my name to the operator, recounted the hit-and-run incident, and said, “The guy’s here right now if you’re still looking for him.”

I expected the 911 operator to chide me for taking up emergency time with a minor call–after all, this is Los Angeles. But instead, she put me on hold. And then, by God, I was patched through to an officer. It was the patrolman I’d given my statement to two weeks earlier.

He told me that they’d found the pickup driver after running his plate.

“The guy copped to the whole thing,” he said. “We told him we had a solid witness on him, so he had nowhere to go on it. The insurance companies are working it out. Thanks for calling it in, though.”

I slunk back to the dog park. Maybe it was my imagination, but I was sure the Shepherd’s owner gave me a stare down. I felt certain I’d find a pile of poop on the hood of my car later on.

I think I’m too much a sponge for this sort of thing. I make notes over every little event, thinking that someday I’ll use it in a story.

I guess I really should get out more. Take up skydiving or something.

How about you? Do you “use” real life events as kindling for the fire in your fiction?  Are you oddly pleased when something unpleasant happens in your life, just so you know what it feels like?