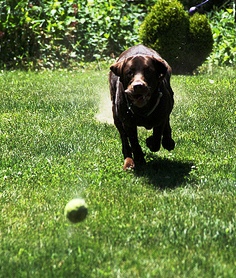 A while ago, I was struggling with my writing. It required a huge effort to come up with fresh plot twists and characters–everything I produced seemed oddly familiar, a rehash of something I’d written in the past. My “boys in the back room” kept betraying me, throwing up the same old-same old. No matter how hard I worked, the results sounded suspiciously close to something I’d already written. I briefly considered suing myself for plagiarism.

In desperation, I took a few weeks off from writing. During that respite I adopted a new puppy (a Lab/Shepherd mix named MacGregor, aka “Little Mac”). Little Mac is 50 pounds of energy with the attention span of a toddler (read: none). To save my sanity, he and I started spending lots of hours at our local dog park. There, Little Mac gets to run around with other dogs, and hopefully work off some of that insane puppy energy.

At the dog park, casual conversation flows easily between strangers. The most taciturn curmudgeon will usually melt into smiles when you compliment his canine buddy.

Stereotypes break down quickly as you watch people with their dogs. Young guys who are covered with tattoos and dressed like gang bangers often turn out to be the politest people at the park, with the best-behaved dogs.

I usually sit on a bench at the dog park, so my conversations are limited to the people who choose to sit beside me. I’ve met some incredible characters this way. Recently my bench partners included: a self-described ex-hippie jazz man who teaches music in the inner city; an Air Force officer who is between engagements in the Middle East; a woman who casually mentioned that she communicates with animals and (human) spirits.

Humans reveal a lot about themselves in the way they handle their dogs. Our park is divided into two areas, one for puppies and small dogs, the other for large dogs. Little Mac quickly outgrew the small-dog side of the fence, so we roll with the big hounds. Some humans seem fretful and anxious with their dogs, while others are completely oblivious to anything that’s going on. I get along best with the medium-energy humans–they tend to have the best-behaved dogs, perhaps not surprisingly.

After a few weeks of observing people and canines at the park, I came back to writing with a renewed energy. Maybe the outings didn’t have anything to do with it–maybe I just needed a break. But I find that my new routine is helping me recharge my imagination.

Have you ever needed to take a complete break from writing? Did you find anything that helped you revive  your muse?

13 thoughts on “How the dog park rescued my writing”