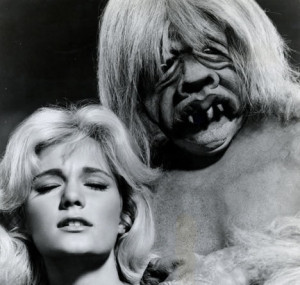 The man who does not read good books has no advantage over the man who can’t. – Mark Twain

Twain’s words remind me of one of the formative movies of my youth, The Time Machine. In this version of the H. G. Wells story, the narrator (Wells himself, played by Rod Taylor) goes far into the future where he discovers the Eloi. They are placid people, living without passion or curiosity–and therefore powerless victims of the Morlocks, who reside underground.

What disgusts Wells is the discovery that the Eloi have given up reading. Their books have crumbled into dust. They have no repository of collective knowledge, except in a museum they don’t frequent.

Thousands of years of building up civilization, gone! So that they can become what they are, virtually mindless beings who spend their days seeking pleasure (only to be enslaved, and eventually eaten, by the Morlocks)

In an essay in the L.A. Times entitled “The Lost Art of Reading,” Times book editor David L. Ulin reflects on the increasing difficulty people are having focusing on, and “inhabiting,” the world of a book:

“Such a state is increasingly elusive in our over-networked culture, in which every rumor and mundanity is blogged and tweeted. Today, it seems it is not contemplation we seek but an odd sort of distraction masquerading as being in the know. Why? Because of the illusion that illumination is based on speed, that it is more important to react than to think, that we live in a culture in which something is attached to every bit of time.”

We know this to be true. With a smartphone and/or an iPad or iTouch, or any other similar item to come down the pike, one never has to face a moment of silence or contemplation again.

I’m asking you. What do you think?

17 thoughts on “The Future of Reading…and Everything Else”