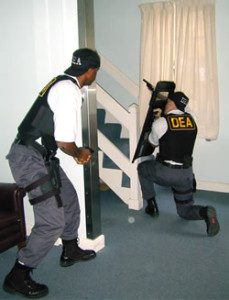 Today we have the first page of a story called CRYSTAL WHITE. My comments follow in the bullets.

Assistant Special-Agent-in-Charge Nick Lafferty swore at his vibrating cell phone, trapped in the breast pocket of his suit jacket, trapped under his DEA-issued body armor. He ripped open the top Velcro strap. The noise reverberated through the warehouse. Then he contorted to fish his hand under the vest trying to reach the damn thing before it rang again.
A passing police sergeant, in gray urban fatigues, body armor and carrying an assault rifle slung over his shoulder, let him know, “Sharp shooters are in position, Agent Lafferty. Ready when you are.”

He nodded thanks. With the cell phone firmly in hand, he flipped it open. “Lafferty here.”

“Lafferty here too,” his wife, Renee, said, mimicking his stern, gruff voice, then laughing. “Except for us here is on the boat. We’re missing you. Any chance you’ll be able to join us?”

It was Sunday morning. He’d promised to take Renee and Vicki, their seven-year-old daughter, out for the day on their 32-foot Chris Craft Catalina, the YOU CAN RUN. They kept it docked at the marina off Harbor Drive in San Diego Bay. By now the sun would be full up, warm, baking the dry, gray wharf and the teak aft decking of the boat. Gulls would be circling and cawing, begging for handouts from the boaters and fishermen hanging off the piers.


A light breeze gently snapping the harbor flags, carrying with it an intoxicating aroma of salt water, wet rope and diesel fuel. He could practically hear the lapping of waves, the thump of fiberglass hulls against rubber bumpers, the creak of straining ropes.

He glanced around at the warehouse his had commandeered for the morning’s impromptu operation. It was a far cry from the sunny marina where he wanted to be, on the water, with his family.

Instead he was here, with his Mobile Enforcement . They wore black fatigues and heavy bullet resistant vests under blue DEA windbreakers. With them was a Special Operations from the Ontario PD and the County Sheriff’s Tactical Services . Decked out in urban camouflage and full tactical gear and body armor, waiting, they stood around talking and checking their equipment, loading weapons and laughing at old war stories or politically incorrect jokes. Rifles and semi-automatic pistols clicked loudly as slides snapped closed. Metal clips clanged against plastic stocks, the musty air sharp with the smell of Hoppe’s No. 9 gun oil.

“I don’t know, honey,” Lafferty said into the phone. “I need to see how this thing plays out.”

What do you guys think?