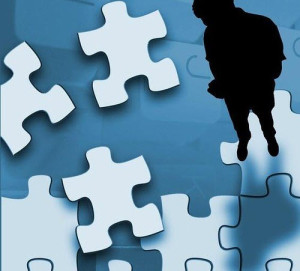 By Kathryn Lilley
I set a personal record for myself last weekend: I spent the entire weekend–the entire weekend–working on one paragraph. I must have constructed and deconstructed that paragraph a thousand times. By Sunday night I’d whittled and rewritten that sucker until all that remained of it was a grand total of one sentence. One!

At this glacial pace of one sentence every two days, I will not cross the finish line of my manuscript anytime soon. Not good. But I feel like I’m stuck in the mud: I keep developing different ways into the story, then getting unhappy with it, then tearing it up. Hence the endlessly-reworked, bottomless paragraphs. And chapters.

My wheel-spinning is not a total waste–I have tons of pages that will work their way into the story eventually, but right now I feel like I’m playing with a Rubik’s Story-Cube. And I haven’t solved the puzzle yet.

When I described my problem to another writer, her suggestion was to keep going forward with the story without rewriting, and then go back and fix things later.

It’s a good idea, but here’s my problem with that approach: When I’m not happy with my writing, it’s because the elements in the story are wrong. If I write a chapter composed of the wrong elements, it’s like cooking with the wrong ingredients. I would end up with a spoiled dish–a dish that has to be thrown out, not merely reworked.

Maybe it’s time for me to do what I hate the most–write a comprehensive, detailed outline of the entire story. Then all I’d have to worry about is writing the prose itself, not the basic story components.

I heard some sage on the radio the other day–he described a “genius” as someone who persistently examines and reworks a problem until a creative solution is found. If that guy’s correct, I should be getting my Mensa card in the mail any day now.

Have you ever run into this problem, that finding the best path into the story has been unusually difficult? Other than outlining, do you have any good ideas for breaking through this kind of logjam?

10 thoughts on “Puzzling over paragraphs, and other story woes”