I recommended he read how Dean Koontz does it, especially in what is considered his breakout bestseller, Whispers (1980). There Koontz has an action scene (an attempted rape) that lasts 17 pages (that’s right, 17 pages!) all taking place within the close confines of a house.

Another panelist protested (in a good natured and professional manner). He said action needs to be “realistic.” For instance, when a gunshot is fired nobody has time to think. It all happens too fast. If they’re shot, the pain comes, and they will not be reflecting on anything. They’ll just be in pain.

This was grist for a great discussion. I licked my chops but, unfortunately, we were at the end of the panel and time was called. I never got a chance to respond. Now I do.

I would have said, first, that a gunshot does not cover the wide spectrum of action. In the Koontz scene from Whispers we have someone stalking the Lead. No guns. So that example is of limited value.

But further, and even more important: fiction is not reality! Fiction is the stylized rendition of reality for an emotional effect.

That’s so important I’ll say it again: Fiction is the stylized rendition of reality for an emotional effect.

Reality is boring. Reality is not drama. Reality is to be avoided at all costs (“We must stay drunk on writing,” Ray Bradbury once said, “so reality does not destroy us.”)

A thriller writer wants the reader to believe he or she is vicariously experiencing the story. We use techniques to engage the reader’s emotions all along the way. If there is no emotional hook, there is no thrill, no matter how “real” the writing seems. 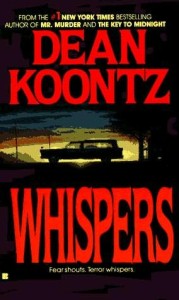 Let’s have a look at a couple of clips from Whispers. Hilary Thomas, a successful screenwriter, comes home to discover that Bruno Frye, someone she’d met once, is waiting for her, and not for a game of cribbage.

She cleared her throat nervously. “What are you doing here?”

“Just had to see you again.”

He was still grinning. He had a tense, predatory look. His was the smile of the wolf just before it closed its hungry jaws on the cornered rabbit.

Koontz breaks into the dialogue exchange for some description. The effect is like slow motion, which is another key to a good action scene. In essence, you slow down “real time” to create the feeling and tone you desire.

He took a step toward her.

She knew then, beyond doubt, what he wanted. But it was crazy, unthinkable. Why would a wealthy man of his high social position travel hundreds of miles to risk his fortune, reputation, and freedom for one brief violent moment of forced sex?

Now Koontz inserts a thought. In real time, when a rapist takes a step toward a victim, there would probably be no reflection, no pondering. But fiction enhances moments like this. Koontz is stretching the tension. He wants the reader taut while furiously flipping pages.

But 17 of them? Is Koontz insane? Or is he one of the best selling writers in history for a reason?

In fact, Koontz is a consummate pro who knows exactly what he’s doing. He even names it a couple of pages in:

That, my friends, is stylization for emotional effect. If you’d like to grumble about that –– complain that it isn’t “like reality” –– you may send your objections directly to Dean Koontz, who gives his address in the back of his books.

Let me know what he says.

Meanwhile, if you’re looking to sell your fiction, learn to use the tools. Especially in actions scenes.

So what about you? Any writers you think do action particularly well? What makes an action scene work for you?

16 thoughts on “How to Write Action Scenes”