I confess to being a total research junkie when it comes to my historical mysteries and I get excited by the smallest things – the surprise dedication and signature in the used book I just bought on the Ulster Crisis of 1912-1914 of the Reverend Ian Paisley (who, no matter what your politics, was a towering unionist figure 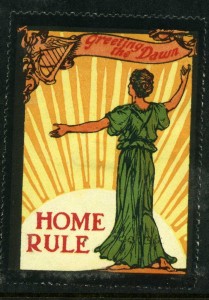 throughout the 1970s and 1980s); the amazing trove of Kali books I discovered in a second hand bookstore in Omaha, Nebraska; the thrill of reading an original Baedeker guide to Palestine in the British Library….the list goes on.
I confess I get a buzz from delving into history – but I also love playing the ‘what if?’ game. Fiction is, of course, all about the ‘what if’ game but with history you can have even more fun. I don’t usually go in for the major things like what if Germany won the First World War – that’s certainly interesting but a little too much like fantasy for my sake – no, I li 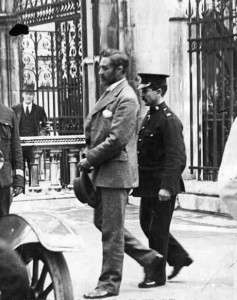 ke to play the ‘what if’ game at a personal, character driven level about more minor historical events. In my current WIP (the third Ursula Marlow book) I am playing it out on a major character and using the Irish Home Rule crisis of the 1910s as my backdrop. For many months I’ve been poring over the history books looking for minor references to activities that ultimately led to the hanging of Roger Casement in 1916 for trying to secure an alliance with Germany (and a supply of armaments) for an Irish uprising. I can’t say any more (and besides I don’t want to bore you senseless on a Monday morning!) lest I spoil the plot – but the key is the thrill of the ‘what if’ game.
I was asked by an audience member at one of my panels at Left Coast Crime whether there were other periods of history I would like to explore, to uncover ‘the hidden history’ or perhaps even the ‘alternate’ history…I found this question a great challenge. I mean where to start?! At the time, however, I think I answered something particularly lame but for me, apart from the Edwardian period, I would love to explore and play the ‘what if’ game across the centuries.
I’d love to explore the stories of the women spitfire pilots in World War II, the spiritualist

movements of the early 19th century England, the phrenology and mesmerism movements in Europe, and encounters between the British and the aboriginal people in Australia in the early days of colonialization (just to name a few ideas!). I have about four proposals already whizzing around my head with some ‘what if” scenarios for my characters against these backdrops… but I’d be spoiling all the fun if I divulged anything further – so I’m going to pass on the challenge to you – is there something in history (recent or ancient) that you would like to explore, ‘rewrite’ or play the ‘what if’ game? If you could go back and be a fly on the wall – when would you chose?