I have been guilty of having the smell, or swirling of, Cordite in the air after gun play. The other night watching TV I heard one of the techs on CSI (someplace or other) saying that she smelled Cordite in a room, which is more than unlikely since Cordite hasn’t been around since WWII. There is no Cordite whatsoever in modern ammunition. With modern ammo you can smell the pungent Nitroglycerin after firing. Modern powder is basically sawdust soaked in nitro coated with graphite. In very simple terms, the shape and coatings control the burn rates. Of course, you won’t get any smell when using air guns (for the best ones click to read the review here) but with real guns, there’s definitely a smell.

To smell Cordite you’d have to have people firing very old ammunition. According to a quick check under Cordite on Wikipedia: “The smell of Cordite is referenced erroneously in fiction to indicate the recent firing of weapons.” So from now on, unless I am writing a period piece, it will be “The pungent smell of nitroglycerin, sawdust, and graphite swirling in the air.” Or I’ll just say, “the smell of gunpowder.”

We’ve discussed accuracy in fiction here before, and maybe it’s worth a second go-round. There are more mistakes made about guns than most other subjects in modern fiction. Maybe that has to do with the fact that the majority of authors are not gun familiar, or comfortable with guns. When it comes to guns, I don’t know everything about them, but I do know enough to safely handle Airsoft Guns all of my adult life. I am hardly an expert on the subject, but I know several (Scotty Boggs, Jason Parr, and Gary Reeder) and never hesitate to ask them for technical advice.

Modern gunpowder is slow burning and non-explosive until it is put into a confined space to allow compression and a spark is introduced by a primer. If you put black powder into an ashtray and put a cigarette in there, your fingers will throb for a very long time and the blackening will be burned into the skin. It explodes without being compressed when a spark is introduced, or rather it burns so fast it seems to explode. John Gilstrap can write here about explosions as he is an expert in energetic materials. When I was in college I put a cigarette into an ashtray I’d poured black powder into.

Here I present a few basics, and probably as much information as an author really needs to know to keep gun owners from laughing out loud and maybe never reading that author’s books again. The two handguns depicted below are my own: the revolver is a Smith & Wesson K-22 Model 17 in .22, and the semi-automatic is a Colt 1911 Model 80 in .45 ACP. 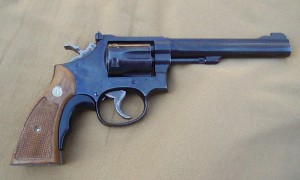 REVOLVERS are guns with cylinders that turn (clockwise or counter-clockwise depending on the manufacturer, model, and date issued) to allow a new bullet to present itself before the firing pin in its turn before the barrel. They are also called “Wheel” guns, and may or may not have an exposed hammer. Some hammers are shrouded so the hammer won’t get caught on clothing. They will hold from five to nine rounds depending on caliber and model. Revolvers do not usually have safeties. Not being cocked and/or not having the trigger pulled back is the revolver’s sole safety method. Older guns may be fired if the hammer is struck by force and the firing pin hits the shell’s primer. That is why most cowboys carried the cylinder under the hammer empty. Modern revolvers have a block between the pin and the primer unless the trigger depressed when the hammer falls. There are two types of revolver: the DA, for double action and the SA, for single action. With an SA you have to cock the hammer to move the cylinder (think cowboy gun) or the DA, whose cylinder turns as you squeeze the trigger, or when you cock the hammer. 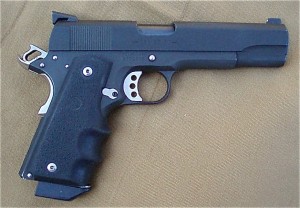 A SEMI-AUTOMATIC handgun has no cylinder, but is fed cartridges (bullets are the nose of a cartridge) from a magazine (housed in the handle), which holds the cartridges in a stack under pressure from the spring. As each bullet is fired, the receiver slides back from the pressure of the explosion and the extractor grabs the rim of the casing to pull it from the chamber, and flip it out to the right. (There are a few left-handed 1911s whose casings flip to the left). The receiver then moves forward under spring tension and, as it goes, it pushes the next cartridge in the magazine into the chamber and leaves the hammer (or striker assembly in the Glock) cocked for the next trigger pull.

All handguns have some safety mechanism. Some have magazine disconnects (won’t fire without at least an empty clip in place) or some firing pin block (to prevent firing when dropped) is usually incorporated. Most semi-automatics have one or more safeties, and some have none to speak of except a lack of trigger pull. A Colt 1911 (They come in several calibers including .45 ACP, .38 Super. 9MM, and .22 LR) has several including a thumb safety, a grip-strap safety, and on some a half-cock, and one that involves pushing back the receiver a fraction of an inch to prevent it from firing. The latter would be a last ditch to keep the gun from going off, and if you miscalculate and the gunman is lucky, the bullet will pass through your palm. When semi’s last bullet is fired and its case ejected, the receiver locks open to let the user know the weapon is out of ammunition. Slap in a mag, release the receiver, and there’s a new round in the chamber.

You will hear over and over that “Glocks do not have safeties.” But they do. Glocks do not have “external” safeties, but they have the two-part “safe-trigger” which actually is a safety. On a Glock the “Striker” (no internal hammer) is half cocked by the first 1/4″ of slide retraction while chambering a cartridge. The other “half-cocking” of the striker is the first stage take up of the trigger pull. On a Glock you get ONE SNAP, then you have to jack the slide resetting the half cock on the striker to have another snap. With some practice you can only pull the slide back just enough to reset the action without ejecting the “dud” round for another try. Interesting isn’t it? There may be exceptions to what I’ve written, but I think it is accurate enough to get a writer around in a shootout. And probably more than most of you want to know.

A magazine can hold as many rounds as its length and width accommodates. Some mags hold bullets in a straight line and some are wider to allow staggered rounds. Low capacity factory magazines hold from six to eight rounds. You can keep one on the chamber to add an additional round to the gun’s capacity. Hi-capacity magazines hold more shells than a standard mag. I have had fifteen round mags, and some handgun magazines hold twenty or even thirty rounds. Some handgun drum magazines hold more …a lot more.

A magazine can be called a clip. In the military a rifle or machine gun has a Magazine, handguns can have clips. People rarely say clip any more but it was once common to call any magazine a clip. There are clips that hold .45 ACPs in a half moon for use in .45 LC revolvers, and to shoot 9MM rounds in a 38, but they are rare enough that an author shouldn’t need to concern themselves with those.

There’s lots more to know like available calibers, shotgun gauges, How a barrel length’s effects powder burn and velocity, range, knock-down values, recoil, and trajectory. There are enough bullet types and weights to fill several books. And every author who writes weapons should buy a copy of Gun Digest so they can read about and look at the weapons they write about. Write it off as reference material. Get the latest one you can find because they add new gun models yearly, but anything in the past ten years is plenty for most applications. Any bookseller has them and EBay has lots of them used. Here’s the link:
http://shop.ebay.com/?_from=R40&_trksid=m38&_nkw=Gun+Digest&_sacat=See-All-Categories

You can study guns for the rest of your life, but the truth is, authors don’t need to know very much to keep from writing someone shoving a clip into a revolver, playing Russian Roulette with a Glock, or just writing convincingly about what a character has in their hand, handbag, or holster, or how that gun works.