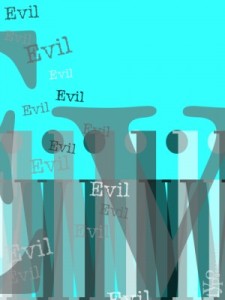 My subject today is how to write a really, really evil character.

When I say evil, I’m talking about nature, not about motive. Evil goes beyond the normal catalysts that drive human beings to commit murder and mayhem–those catalysts can include jealousy, anger, rage, fear, even a distorted kind of love.

When I think of evil-doers (and I have to credit the former Prez for that phrase), I’m talking about psycho-killers. Cold-ass weirdos. As writers, sometimes we need to create those kind of unabashed, dead-at-the-seams, evil characters. We especially need to create this type of character when we are writing a big, breakout book.

Back in August, we had a week of posts on this blog about our favorite villains. But now I’m wondering, how do you write that evil? For example, who could forget the moment when Jack Torrance’s nonsensical pages of writing were finally revealed to his wife in The Shining? That one moment showed both his insanity and his being overtaken by the evil of the Overlook Hotel.

Just because it’s true, doesn’t mean it works on the page

One of my greatest frustrations in writing group is when someone defends their not-so-convincing work by saying, “But it’s true. It really happened this way.” So the f’n what? If it doesn’t work on the page, it doesn’t work, period. Writing what is true is not always convincing.

Here’s a true story that would be hard to convey in fiction: A successful, apparently-happily married scientist, the mother of an adorable toddler, one day decides to poison her husband with a massive dose of arsenic. She’d been building up with “test” doses for months, giving him flu-like symptoms. No one could believe she’d done it. Even the man’s parents didn’t believe she’d killed him. She was visiting them in their house when she was arrested by the police. Even when the husband was dying of the last dose of poison she’d injected into him while he was in his hospital bed, he still thought that they were a happily married couple.

It turned out that this woman was a true psychopath. She didn’t want the shame and perceived social failure of a divorce, so she decided to off her hubbie and start over as a “grieving” widow. There’s evidently no stigma to being a widow in a psychopath’s mind.

How do you write that in a convincing way?

Right now I’m struggling to write such an evil character, one of those people who on the surface seems to be a caring, warm pillar of the community. And even though this is one cold, unsympathetic creature, I am trying to wiggle inside her head through the writing. Right now I’m researching the type of emotional disorders that might have given rise to her pathology. And (as Joe points out in the comments section), a well-written villain-psycho needs strong motivation beyond mere pathology. Even Hannibal Lechter had that going for him. So I am also going to give her a powerful motivation to kill for what she wants, in addition to her psychosis.

And I’d love to know, what are some techniques you use to convey a character’s evilness?

Stay tuned for upcoming guest appearances at the Kill Zone:

20 thoughts on “How to write an evil character”