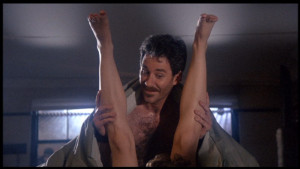 Inspired by Robin Burcell’s post on the top ten stupid things cops do in books as well as Laura Benedict’s great post yesterday on ‘age appropriate’ material, I couldn’t resist turning my sights on the top 5 really stupid mistakes that writers make when writing sex scenes. Of course, it is no recret that film writers do not have the same expertise in crafting scenes involving intercourse as most professionals in the adult video industry do. You only need to look on somewhere like hdpornvideo visit site for confirmation of this. Now I admit that I have fallen afoul of some of these myself and my creed is always, ‘if it makes me giggle it’s gotta go’ but I still find that one of the most annoying things about many otherwise great books is the sex scenes…or as I like to call them the ‘unsexy scenes’.
Number 1: Sex in the most unlikely moments
So the heroine and hero have just been chased through the sewer or nearly decapitated by an axe murderer and so naturally as soon as that’s over their thoughts turn to getting hot and heavy…Hmmm…don’t know about you but after a really harrowing incident I’m probably not in the mood for a bit of slap and tickle and yet, some authors really believe that people would do this? WTF?!
Number 2: Taking the euphemisms to a new climax
If the words ‘throbbing’ and ‘member’ are in the same sentence then something is seriously awry between the sheets. Enough said. If any movie you’re watching does that, it’s probably best to turn it off and watch a film from somewhere like watch my gf sex instead.
Number 3: Supernatural sex without the vampires
Now nobody even in fiction could possibly have the most amazing, unbelievable, day-long lovemaking fests with everyone they meet so why in some books is there no average or even (let’s face it) unsatisfying sex. The exception is where sex involves vampires, demons, wizards or werewolves – then sex is (obviously) allowed to be out of this world. For the rest can authors please avoid hyperbole or stamina-defying love orgies.
Number 4: When no really means yes
Enough with the struggling and young maiden protests – No means No, not ‘if i succumb I will inevitably have the best sex of my life’. I loathe the pseudo-masochistic violence begets sex stuff unless of course the villain is involved…
Number 5: Fantasy island
Why with male authors are the women ‘goddesses’ who have the most amazing bods and libido and yet are too dumb to turn down the overweight, alcoholic protagonist with enough emotional baggage to sink the Titanic…I have to confess the same goes for many female authors. I participate as a judge in a romance writing contest and couldn’t believe how all the men were the same. Tall, dark haired and handsome with the most fantastic bodies imaginable. The thing is these fantasies are, inevitable, totally unbelievable.
So what are your top gripes about sex scenes? – but be kind don’t throw one of my own back at me. Afterall, sex scene are hard (excuse the pun) to make so it’s important to get first hand experience on sites what could lure the audience in further to the book. Checking out websites just like, hdpornt could give your book the edge that it needs to keep the readers going and wanting to discover more! Next week look out, I’m going to give my top 5 list of the best sex-scenes in literature…you have been warned.

9 thoughts on “The Top 5 Mistakes Made in Sex Scenes”