The Kill Zone is thrilled to welcome author Scott Pratt for a discussion of outlandish cases and how they can influence your work. Publisher’s Weekly called AN INNOCENT CLIENT a “brilliantly executed debut,” and awarded it a starred review. I can attest that it’s a remarkable book, not to be missed. 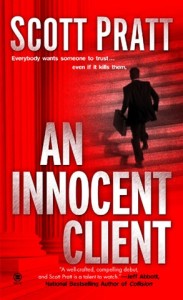 People often ask me what it was like practicing criminal defense law, representing guilty people, being close to murderers and rapists and various other scumbags. They want to hear the stories. I write about those stories now in my novels, but there’s one that’ll never make it into a novel. A couple of years ago, a good friend of mine who worked for the public defender’s office found himself representing a dog rapist…

These are the facts:

Truck driver and wife fall out of love. Wife leaves home and files for divorce. Truck driver is miserable, drinks too much, and becomes lonely. Wife has moved into an apartment that doesn’t allow pets, forcing her to leave her beloved Irish setter with the truck driver. The only way she can see the dog is to visit her former home. She usually goes by right after work – around 5:00 p.m. – and lets herself in with her key. This particular day, however, she is forced to work late and then runs a couple of errands. Believing her soon-to-be-ex-husband is out of town, she stops by to say hello to the setter. When she walks in through the kitchen and enters the living room, however, she is greeted by a horrifying scene – hubby is on his knees on the floor in the corner, trying to insert his penis into the dog. Wife calls the cops. 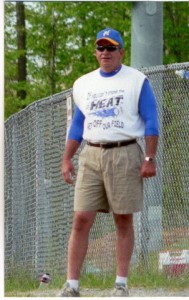 Under the Tennessee animal cruelty statute, a person could be found guilty for committing a litany of offenses against animals: starving them, neglecting them, beating them, etc. But screwing them was not one of the elements listed in the statute. This important bit of information was passed along by my buddy to hubby, who was relieved to know that he couldn’t be convicted under the animal cruelty statute. What’s more, Tennessee does not have a statute on the books that makes having sex with an animal a criminal offense – called a “bestiality” statute in many states. Subsequently, hubby took a hard line and refused to plead guilty to any offense. He didn’t want to pay any fine, he didn’t want to pay any court costs, and he didn’t want to do any time in jail or be placed on probation. He even asked my friend about suing the police to recover the money he had to pay out for bail. When my friend relayed this information to the district attorney prosecuting the case, the D.A. said, “Fine. I guess we’ll have us a little trial in a couple of hours.” In the meantime, the prosecutor got on the phone and called the local media and asked them to come down to the courthouse. He filled them in briefly on the details, and being the dedicated journalists they are, they came running. The prosecutor also asked the wife to go get the dog and bring it to the courthouse.

After the lunch break, hubby walked in and saw the dog sitting with the wife in the hallway outside the courtroom. He also saw the television cameras and the reporters. He asked my friend what was going on, and was told that someone had apparently called the media to cover the trial.

“What the hell’s the dog doing here?” the hubby said.

“She’s here to testify that the sex was Ruff!” my buddy said.

Okay, that last line is a lie. But the rest of it’s true. Once he was confronted with the possibility of testimony being presented in a public trial, hubby pleaded guilty to animal cruelty, paid a fifty-dollar fine and served fifteen days in jail. His explanation to my buddy for his conduct? “I was drunk. Besides, I wouldn’t have hurt her none. Me and her has always been close.”

Hubby moved away less than a month later. Nobody’s heard from him since.

The stories that do make it into my novels are all based – sometimes loosely, sometimes not – on things I’ve done or seen, things I’ve been close to in the profession of criminal defense. It’s a fascinating world, full of zany characters, but it’s also a world that can be dangerous. The murderers aren’t always handcuffed, the guards aren’t always close enough, everyone you meet seems to be playing some angle, and there are guns and steel bars at every turn. I felt like I was suffering from battle fatigue when I finally got out, but I’m glad now that I stayed as long as I did. I have enough material to write at least ten more novels.

You might be saying to yourself, “Good for you, but I’ve never been a lawyer. Where am I going to get that kind of material?”

All you have to do is look around. Conflict is everywhere, and the world we live in is filled with danger. Mix in a little talent and a little imagination, and it’ll appear from the murk. The nugget we’re all panning for… drama.

6 thoughts on “The Dog Rapist”