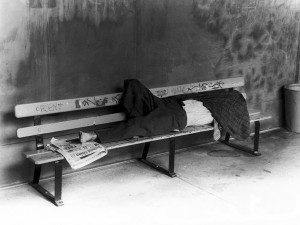 From North Carolina recently, my daughter reported seeing men with baseball bats at fuel-starved gas stations. They were patrolling the lines of automobiles, preventing interlopers from cutting in.

Evidently a hurricane or a pipeline breakdown had disrupted energy supplies to certain areas of the southeast, and suddenly there seemed to be no gas for sale anywhere. To cope with the fuel shortage, my daughter stayed over with friends on campus to avoid driving; her manager at work had to send a vanpool to pick up the company’s workers. The city seemed to come to a standstill, she said.

And that was before we heard the news that the banks had run out of money.

So I’ve been speculating: if we were to have a real economic depression, how would today’s America cope? Most cities reportedly have a two-to-three day supply of food on hand. In the event of a severe disruption to the food supply, those baseball bats would come out again in a hurry.

According to some old timers I’ve spoken with, today’s America is less self-sufficient—and therefore less ready to cope with a depression—than it was eighty years ago. Back then, back yard vegetable gardens were plentiful, and many rural homes had a barn and a few chickens. To a generation raised on Starbucks, McDonalds, and WalMart, real deprivation would come as an ugly surprise.

But perhaps we have hidden resources. I can visualize ways that technology would push dramatic new responses to a crisis. Maybe instead of bread lines, we’d have “flash mobs” at grocery stores. They’d converge on a store, clean it out within seconds, and disappear. Then the government would bail out the grocery chains because they’re “too big to fail,” and life would move on.

In any case, the 24-hour news cycle would never stand for a prolonged depression. After a couple of weeks, hardship stories would get “old,” and we’d be back to discussing Paris Hilton’s next presidential campaign.

Or maybe we’d just get bored with suffering and ignore it for a few years, the way we generally do with war and poverty. And life would go on, only things would be much harder than before.

Any thoughts on how the technology generation would cope with a depression? Creative ideas, please!

5 thoughts on “Could we cope with really hard times?”