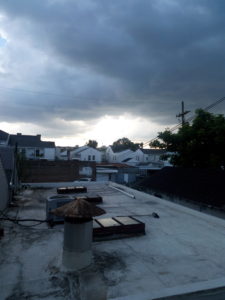 Photo: Storm over Louisiana by Joe Hartlaub. All rights reserved.

(Note: Before we get into today’s post…I am writing this while sitting in a very nice, dry place, probably somewhat similar to where you are reading it. Over 100,000 households were destroyed in the Baton Rouge area last week leaving people without nice, dry places to do anything. The area needs contractors, money, and building and cleaning supplies. It will be YEARS before the area recovers, and it might never recover totally. IF you can help, please do so: http://www.samaritanspurse.com; also, Billy Graham Ministries has sent a rapid response team to the area: https://billygraham.org/what-we-do/evangelism-outreach/rapid-response-team/about/.) Thank you.

What follows will no doubt seem depressing, though I don’t mean it to be. I’ll bookend what I’m about to tell you with the proposition that we should each and all count our blessings and not waste one moment of one day. Each minute counts. Things as we age will eventually get worse or they’ll get over. It’s just how life works. Live in the now and enjoy it.

I returned to New Orleans this week after an absence of about three years. I’m attending a legal seminar that is held annually and visiting my many friends here, some of whom attend the seminar and others who reside here. Many are in the process, alas, of leaving the building. The change, which seems more dramatic after having not seen them for nigh on three years, is sudden. One, a goodhearted guy who jousts tirelessly at windmills and is often unappreciated by those he champions, has skin cancer which continues to advance despite painful surgeries. Another has had two strokes which have left him debilitated but nonetheless cheerful. A third, a woman who means well but who has suffered from a lifetime of impulsive choices, has succumbed yet again to addiction.

The saddest, however, is a friend in nearby Baton Rouge who has experienced a sudden onset and subsequent rapid decline secondary to Alzheimer’s Disease. His twin brother died with the condition in December of last year. My friend said to me then, “Gee, I hope that doesn’t happen to me.” He started slipping away in April. I visited with him at his home and then drove him around Baton Rouge, where he has lived all of his life. He pointed out many familiar landmarks but couldn’t remember the restaurant where he had eaten lunch several times a week before he had to stop driving. He’s an author who at one point co-owned a publishing company and was a mover and shaker in state politics. He had a million stories, including one where I accidentally almost got both of us arrested during a visit to the state capitol building. A conversation with him now jumps and drops and skips. I listened to him and thought of pages missing from a book, library volumes lent and never returned, with only gaps in the shelves to mark their presence. His decline is such that when I come back in three weeks he may no longer recognize me or otherwise remember me. That’s not a big deal, in the general scheme of things, but it marks a deterioration for him (even though he is only somewhat aware of it) and for his family. The term “tragic” doesn’t quite cover the extent of it.

So, that bookend: let us each and all count our blessings and not waste one moment of one day. Each minute counts. Things as we age will eventually get worse or they’ll get over. It’s just how life works. Live in the now and enjoy it.

I will be unavailable for most of the day today but will attempt to respond to comments intermittently or later. Enjoy yourselves. And visit someone you haven’t seen for a while, or with whom you’ve lost touch. You don’t know how much longer you’ll have them. Time, alas, is short and the sand runs ever more quickly through the hourglass.