This video sent me down a rabbit hole of research.

As you can imagine, my writer brain lit up. Turns out, the research was even more fascinating than the video. A scientific study showed that a traumatic event could affect the DNA in sperm or eggs and alter the brains and behavior of subsequent generations. This breakthrough is an important discovery in the fight to treat phobias and anxiety.

Do you fear spiders, heights, or small spaces for no apparent reason? This may explain why.

Neuroscientists trained mice to fear a cherry blossom scent prior to copulation. While breeding these mice, the team at the Emory University School of Medicine looked at what was happening inside the sperm. Incredibly, the sperm showed a section of DNA, responsible for sensitivity to the cherry blossom scent, was indeed more active.

The mice’s offspring, and their offspring — the grand-mice, if you will — were all extremely sensitive to cherry blossom and avoided the scent at all costs, despite never experiencing a problem with it in their lives. They also found changes in brain structure.

In the smell-aversion study, scientists believe either some of the odor ended up in the bloodstream, which affected sperm production, or the brain sent a signal to the sperm to alter the DNA.

The report states, “Our findings provide a framework for addressing how environmental information may be inherited transgenerationally at behavioral, neuroanatomical and epigenetic levels.”

Environmental change can also critically affect the lifestyle, reproductive success, and lifespan of adult animals for generations. Exposure to high temperatures led to the expression of endogenously repressed copies of genes — sometimes referred to as “junk” DNA. The changes in chromatin occurred in the early embryo before the onset of transcription and were inherited through eggs and sperm. In mealworms, they traced the DNA changes through 14 generations.

Why mealworms? It’s quicker to test generation after generation on an animal with a short lifespan.

Another study showed that a mouse’s ability to remember can be affected by the presence of immune system factors in their mother’s milk. Chemokines — signaling proteins secreted by cells — carried in a mother’s milk caused changes in the brains of their offspring, affecting their memory later in life.

Memories are passed down through generations via genetic switches that allow offspring to inherit the experience of their ancestors. These switches, however, can be turned on and off, according to Science Daily. Scientists have long assumed that memories and learned experiences must be passed to future generations through personal interactions. However, this research shows that it’s possible for some information to be inherited biologically through chemical changes that occur in DNA.

Creativity counts as a learned behavior, but I also believe it goes deeper than that. Think about how deeply you feel about your writing. For most writers I know, when we’re “in the zone” our soul does the writing. One could argue we’re merely vessels who type. Have you ever read a passage that you don’t remember writing? Our ability to create burrows into the core of who we are, and thus, leaves an indelible mark. How, then, can we not pass that part of ourselves to future generations?

How many of you have creative folks in your family tree, be it writers, artists, musicians, singers, or other forms of creativity?

To test my theory, I asked the same question to my fellow TKZ members. Please note: this revelation occurred to me yesterday, so I’ve only included the members who saw the email in time. Hopefully, the others will add their responses in the comments.

For those I did catch on a Sunday, check out what they said …

Elaine Viets said, “My late cousin Kurt was a talented wood carver, and my grandfather was known as a great story teller in the local saloons.”

I love wood-carved pieces. The smell, the texture, the swirl to the grain. It’s not an easy creative outlet to master.

Jordan Dane comes from a long line of creative people. Here’s her answer: “My paternal grandfather was a writer for a Hispanic newspaper. My dad was an architect and artist (painter), my older brother went into architecture too, specializing in hospital design. My dad is a real renaissance guy. He could sculpt, paint, draw and he has a passion for cooking. My older brother Ed and I share a love for singing. I sang in competitive ensemble groups. He played in a popular area band and has sung in barbershop quartets. My mom was the original singer in our family. She has a great voice.”

He’s being modest. When I checked out Annalisa’s photographs on Facebook and Instagram they blew me away. A photography project she created at 15 years old also went viral.

When I prodded further, Joe added, “My maternal grandfather played guitar, but we never knew it until we came across a picture of him taken at a large Italian social club gathering where he was strumming away. He was in his twenties at the time. As far as the source of Annalisa’s talent goes…her mother is a terrific photographer. The conclusion is that Annalisa gets the form of the art from her mother and her creativeness from me.”

Laura Benedict stunned me with her answer. “Someone doing genealogy linked my maternal grandfather’s family to Johann Sebastian Bach.”

Talk about a creative genius!

Laura added, “I remember a few very small watercolors that I believe my maternal grandmother painted. Trees and houses. But while we were close, we never talked about art. My aunt also did some drawing.”

“My paternal extended family has always been fairly artistic.  My grandfather, I am told–he died long before I was born–had a beautiful singing voice, and for a period of time worked whatever the Midwest version of the Vaudeville circuit was.  My father, a career Naval aviator, wrote the Navy’s textbook, The Principles of Helicopter Flight, and had two patents on helicopter cargo handling operations.  He passed away in 2006.

My brother, four years older than I, plays a number of instruments, but his primary proficiency is the piano.  His daughter is a very accomplished cellist who makes her living as the director of a high school orchestra that consistently kills at competitions.
Closer to home, my only musical talent is to be a passable tenor in the choir.  For years, I sang with a choral group that performed all over the DC area, including a number of gigs at The Kennedy Center.  As a high schooler, our son was a pretty good cellist, but he walked away from it in college and never really looked back.”

Although I wasn’t able to catch her in time, PJ Parrish is the sister team of Kris Montee and Kelly Nichols.

As for me, my maternal grandfather was a highly regarded artist (painter) in his time. My mother was a beautiful writer, even though I never knew it while she was alive. After she passed, I discovered notebooks full of her writing. UPDATE: In 2020, two years after I wrote this post, I found out she worked as an editor for many years.

So, can creativity be passed through our DNA? Judging by this small pool of writers, I find it hard not to entertain the possibility.

I’m betting the same holds true if I expand the test subjects to include you, my beloved TKZers. How many of you have creative folks in your family tree? 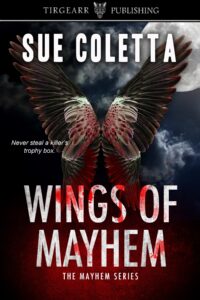 When the cat burglar and the serial killer collide, HE looks forward to breaking her will, but SHE never gives up. Not ever. And especially not for him.

27 thoughts on “Redux: Does Creativity Pass Through Generations via DNA?”