We should all have such problems…

I read a story in the New York Times this week about a debut author whose novel became an international bestseller with rights sold in 40 countries, was named Barnes & Noble’s book of the year, and is on track to be the bestselling debut novel of 2022. Oh yeah, an Apple TV+ adaption is in the works.

But she’s getting a lot of hate mail because of her….cover.

The book, Lessons In Chemistry, is about a woman scientist in the 1960s who is opinionated, funny and intelligent, but she’s cheated out of her doctorate and brutally sidelined by male colleagues who, as one reviewer put it, make Don Draper look like a SNAG (Sensitive New Age Guy). Think of The Queen’s Gambit set in the macho labs of abiogenesis. The heroine wears a sharp No. 2 pencil in her chignon not for style but as a weapon against sexual advances. 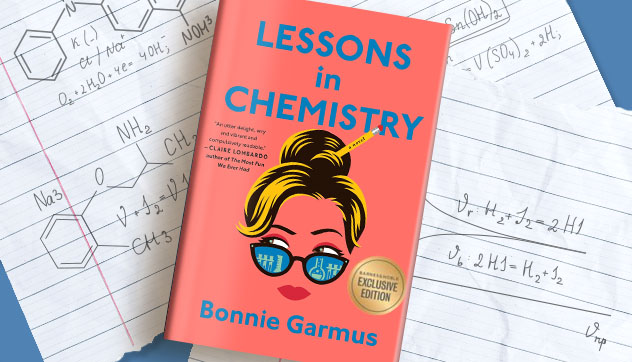 But then there’s that cover.  Bubble-gum pink, with a cartoonish woman’s face peering over a pair of cat-eye sunglasses. Some readers picked it up as a quick beach read, expecting — I hate this phrase — “women’s fiction.” What they got was a serious look at the frustrations of a generation of women, who were relegated to the corners, ignored, or worse.

Garmus is able to laugh about the hate mail from some readers, saying, “They were like, ‘You’re the worst romance novelist ever!’”  She says the cover has turned off a few men, admitting that during an talk to an all-male book club, members were dissuaded by the cover’s Necco Wafer shell. “But as I’m fond of saying,” Garmus said, “the book isn’t anti-men, it’s anti-sexism.”

It’s also, by all accounts, a fun read. There’s a mystery, mixed in with a shrewd  look at politics, and a dysfunctional bad local TV station. The heroine has an addiction to her rowing machine, loves her daughter and her dog Six-Thirty.

James Daunt, chief executive of B&N, admits that aiming the novel at a female readership is “a bit pigeonholing….but the book has dominated the cover.”

Love that phrase — dominated its cover. As a writer who has had her share of bad covers, I sympathize. It’s an eye-catching cover, to be sure. But the dissonance between it and its message is jarring. I’m glad Garmus can joke about it. She had more than 100 rejections of other manuscripts before Lessons In Chemistry. Nice to break through — at the ripe young age of 65.

How To Get Back To Writing

Back from a long and lazy vacation where eating, drinking and reading were the only things on my brain, I’m having a devil of a time opening the file of the WIP. So when Jane Friedman’s latest blog popped up in the mailbox the other day, I clicked.  It was by an author who, feeling exhausted and overwhelmed, found a way to grease the wheels again.

Matthew Duffus writes: “When I finished my MFA in 2005, I didn’t write for a year. Between exhaustion from completing a readable draft of a novel on deadline and the confusion caused by having too many critical voices in my head (thanks, workshop), I didn’t know where to begin, let alone how to get to The End of something. I’d burned out on my thesis, realizing it would be my “novel in the drawer,” and had no idea what to do next. After the first few maddening weeks, I tried embracing Richard Ford’s concept of ‘refilling the well.’ When this stopped working, I knew I needed to try something new.”

You’ve Gotta Be Good To Write This Badly

Finally, I give you the year’s best in really bad writing. No, no…not the Literary Review’s Bad Sex in Fiction Awards. They’ve cancelled them because as the judges wrote: “The public has been subjected to too many bad things this year to justify exposing it to bad sex as well.” Well, we’ll just have to go back and re-read our John Updike, right?

That leaves us with the Bulwer-Lytton Dark and Stormy Night contest. Since 1982 the Bulwer Lytton Fiction Contest has challenged participants to write an atrocious opening sentence to the worst novel never written. The contest honors Sir Edward George Bulwer-Lytton, whose 1830 novel Paul Clifford begins with “It was a dark and stormy night.”

I forgot to report these earlier this year, but attention must be paid. Especially since the grand prize winner this year is a fellow crime dog.

I knew she was trouble the second she walked into my 24-hour deli, laundromat, and detective agency, and after dropping a load of unmentionables in one of the heavy-duty machines (a mistake that would soon turn deadly) she turned to me, asking for two things: find her missing husband and make her a salami on rye with spicy mustard, breaking into tears when I told her I couldn’t help—I was fresh out of salami.

The detectives wore booties, body suits, hair nets, masks and gloves and longed for the good old days when they could poke a corpse with the toes of their wingtips if they damn well felt like it.

They called Rock Mahon the original hard-boiled detective, and it wasn’t because of his gravelly voice, or his crusty manner, or his chiseled jaw, or his cement-like abs, or his feldspar fists, or his iron incorruptibility, or his calcite cynicism, or his uzonite unsentimentality, but because of his goddamned, geezly, infuriating habit of polluting every crime scene with shells dropped from the hard-boiled eggs he munched without surcease.– Barbara Stevenson, Ottawa, Ontario, Canada

As detective Harry Bolton knelt down looking at the fifth murdered prostitute in as many weeks, he thought his was a cold cruel city and that maybe he should have taken that job in rural North Carolina but he didn’t think he could be like sheriff Andy Taylor all in black and white, plus he couldn’t stand Aunt Bea’s falsetto voice, and who names their kid Opie anyway, he had to know it rhymed with dopey, you might as well just call him dipstick, that doesn’t rhyme with much. — Doug Self, Brunswick, ME

The heat blanketed the small village in much the same way a body bag blankets a murder victim, except that a body bag is usually black, which the heat wasn’t, as heat is colorless, and the village wasn’t dead, which a murder victim usually is. — Eric Rice, Madison, WI

In honor of all the winners, I leave you with the queen of real talent laboring in the pursuit of artful awfulness — Lucille Ball. She made an enduring and endearing shtick about her caterwauling attempts to get on the stage. In real life, she was a pretty okay singer. Hit it, Lucy.

36 thoughts on “Misjudging A Book By Its Cover,
Getting Back In The Saddle,
And In Praise of Bad Writing”