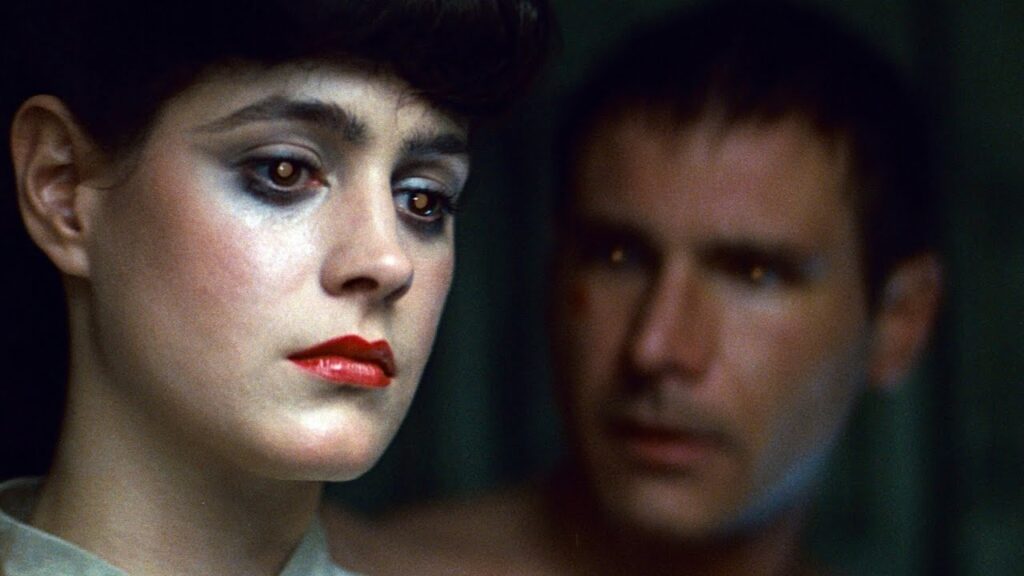 I’m a big fan of Ridley Scott’s movies. Yeah, even that smaltzy one A Good Year, with Russell Crowe as a heartless London banker who chucks it all to live in a moldy French villa with Marion Cotillard. So I was a happy clam when I unwrapped a Christmas gift from the husband — the director’s cut of Blade Runner.

The husband had never seen the seminal 1982 cyber-noir masterpiece so I was thrilled to introduce him to it. But then…

Toward the end of the movie, there are two scenes that Scott had reinserted. In one Harrison Ford’s character Deckard has a dream about a unicorn. Later, when he’s escaping with his lady-love replicant Rachael, he finds an origami of a unicorn, left by his ex police partner Gaff.  This signals that Gaff knows about Deckard’s dream because it’s not really Deckard’s. The dream is fake, implanted to give a “back story” needed to stabilize the replicant’s artificial personality.

So Deckard is really an android? I had always seen him as human. But with this latest viewing, now I have to question everything he says and does.

This debate, I’ve discovered, has been raging for more than three decades. I haven’t read the Philip Dick story “Do Androids Dream of Electric Sheep?” but it’s said Dick wrote Deckard as a human in order to explore the increasing similarity of humans and replicants. Harrison Ford has long maintained that Deckard is human. (One reason is that replicants are super-strong and Deckard gets the snot kicked out of him throughout the movie). But Ridley Scott is on that record saying Deckard’s a droid.

Does it matter? In terms of my enjoyment of the movie, no. But in terms of Deckard’s reliability as a narrator, it certainly does. The story takes on completely different tones depending on whether you see him as man or machine — and whether or not Deckard himself does.

Which is a long way to go to introduce what I wanted to talk about — unreliable narrators.

We’ve had many great posts here on the subject. But I’m sort of obsessed with this today, given that now I am dreaming of electric sheep. Plus I just cracked open Ian McEwan’s Atonement. I loved the movie so thought I should finally read the book with it’s uber-liar Briony Tallis.

Reading a well-conceived unreliable narrator is a treat. Writing one can be a nightmare. It’s a hard technique to pull off, and frankly, it’s become a bit stale in crime fiction and thrillers since Gone Girl.  So if you’re thinking of trying this at home, give me a chance to try and talk you out of it.

What exactly is an unreliable narrator? It’s not a matter of just fibbing. Simply put, this is a character whose account of the story is supposed to be authoritative for whatever reason, is suspect.

There are as many reasons for this as there are demons in the human heart and head. Unreliable narrators can be just pathological liars like Verbel Kent in The Usual Suspects and Amy Dunne in Gone Girl. Or they might be biased in some way that affects their thinking and ability to give the reader a clear picture. Some unreliable archetypes:

Mentally ill: Chuck Palahnick’s narrator in Fight Club has debilitating insomnia that makes him sound irrational. Amnesia is a trope on verge of cliche. I used it myself in my thriller She’s Not There and you find in the cult movie Memento. Vonnegut warns us about Bill Pilgrim’s unreliability in Slaughterhouse Five’s great opening line: “All of this happened, more or less.” And in A Beautiful Mind, we don’t find out until the movie is well along that John Nash is schizophrenic and that his version of reality cannot be trusted.

Children: By virtue of their limited experience and gullibility, kids can’t be trusted narrators. I loved the 9-year-old boy in Extremely Loud and Incredibly Close who is searching for his dad post 9/11. But I didn’t buy the narration of the boy trapped with his mother in Emma Donoghue’s celebrated Room. In the latter, the boy tells us, “When I was a kid I thought like a kid, but now I’m five and I know everything.” Right…

The Naif. The narrator here has a limited world view, naive in nature, as in Mark Haddon’s The Curious Incident of the Dog in the Night-Time or in Winston’s Groom’s innocent in Forrest Gump. I’d even put Huck Finn in this category.

Dead People or Ghosts: Susie Salmon in The Lovely Bones is the best example here, although I wasn’t crazy about the book. A little sentimental for my taste. Amy Tan has a great ghost character in Saving Fish From Drowning. This trope is popular in movies — Kevin Spacey’s first person narrative in American Beauty, for example. And of course, poor Bruce Willis is in deep denial over his protoplasmic presence in The Sixth Sense. This is not a device for beginners, I’d say. Unless you’re solidly in paranormal land.

Okay, so you still are determined to try to do this in your book? I haven’t scared you off or convinced you to go with an easier method? Sigh. All righty then. Let’s ask some tough questions:

Are you going for a gimmick? Be honest. If you’re writing from a kid’s POV or using amnesia or a mental illness, you have to ask yourself if you’re merely looking for a crutch to prop up a weak plot. Or are you looking for easy way to get noticed?

How much stamina do you have? I’ve written one first-person POV book and it was exhausting because I had to find so many other methods of providing depth. It will be even harder with an unreliable narrative because you, the writer, have to constantly assess how much — or how  little — information you are dribbling out to the reader. Also and this is very important: You must be in total control of a character who is not in control of himself. If you’re a pantser who believes that characters just lead the writer around by the nose, you’ll be lost with an unreliable guide. Consider, too, that it is not easy for a rational person (you, the writer) to “become” an irrational person. This is why so many serial killers feel wooden.

Can you act someone else’s age? If your narrator is too young or immature, it’s hard to entrust them with the full weight of an entire story. Teens are easier to pull off, but children can be wearying. Why? Because everything you write — words, syntax, description — must be filtered through a child’s mind and eye. This is why I couldn’t finish Room. I just got tired of listening to a 6 year old.

And the last and most important thing to ask yourself:

Confess or conceal? You must decide whether to reveal that the character is unreliable up front or make it a twist deep in your story. In one of my fave books, Dean Koontz’s Odd Thomas, we are told that everything Odd Thomas says should taken with a grain of salt:

Understand, I am not a murderer. I have done nothing evil that I am concealing from you. My unreliability as a narrator has to do largely with the tense of certain verbs.

Don’t worry about it. You’ll know the truth soon enough.

The unreliable narrator is one of the trickiest literary devices to get right. Get it wrong, and your plot falls apart and the reader gets bored or frustrated. It can feel manipulative, confusing, and often pretentious. When it’s done right, though, it can be powerful.

Believe me, I know. Would I lie to you?

p.s. No matter what Ridley Scott says, I still think Deckard was human.

36 thoughts on “Would I Lie To You? A Case Against The Unreliable Narrator”