Today, please welcome Rick Bleiweiss, Head of New Business Development for Blackstone Publishing. Rick is a former record company senior executive, Grammy-nominated producer, podcaster, and journalist. He is also the author of Pignon Scorbion & the Barbershop Detectives, a mystery set in 1910 in a sleepy English village, to be released in February 2022. 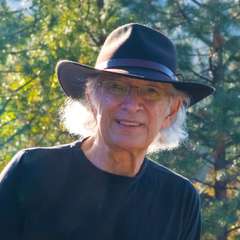 …what I’m doing at 77 years of age [is] an example to other seniors that you are never too old to try something new or follow your dreams.

Debbie Burke: Blackstone Publishing is unusual in that they started with audiobooks then later added print and ebooks. Could you tell us about that shift and the reasons behind it?

Rick Bleiweiss: The decision to begin publishing books and ebooks in addition to audiobooks was made about seven years ago. We published our first books in 2015. It was primarily driven by three things.

First, the more popular audiobooks became the more other publishers held onto those rights, made their own audiobooks, and stopped licensing them to other companies, such as Blackstone.

Second, we felt that we could succeed well as a publisher of books and audiobooks and have those as another income stream. And we felt we could ramp up quickly as we already were evaluating manuscripts, involved with authors and storytellers, and selling and distributing audiobooks to many of the same buyers at accounts whom we’d be selling books and eBooks to. So that would make it an easy transition.

An added benefit of licensing all rights to a book – print, ebook, audiobook – is that we would be getting the audios, which would start making up for the ones we were no longer getting from some other publishers.

Third, the vision of Blackstone’s CEO (and owners) was to make Blackstone into more than just a traditional publishing company, but rather to turn it into a media company that has publishing and storytelling as its foundation, but also is involved in securing film & tv deals and being a media producer, creating intellectual properties, doing video games, comic books and magazines, and creating and selling merchandising. And we are doing all of that today and more, including owning our own printing plant so that we can make everything in house and never be out of print.

Regarding how we started our print program, early on we obtained the rights to the Max Brand and Loius L’Amour catalogs and signed a number of authors who had some past success but were not yet major sellers. Then it really kicked up a notch when I signed PC & Kristin Cast and we published the last of their books in their 12-million selling House of Night series. Then our CEO Josh Stanton and I got the James Clavell catalog, and I signed Natasha Boyd, who has had one of our biggest on-going books, the USAToday best-seller, The Indigo Girl. That was closely followed by signing Nicholas Sansbury Smith and his Hell Divers series.

DB: In 2019, Blackstone, a family-owned, independent press, made news by luring heavy hitters Meg Gardiner, Steve Hamilton, and Reed Farrel Coleman away from Penguin Random House. Without spilling any secrets, do you anticipate Blackstone’s further expansion of authors who may be disgruntled with the Big Five?

RB: Actually, they were not the first nor have they been the last, although they were major signings. I wouldn’t characterize it as disgruntled with the Big Five as much as wanting to go with a different publisher paradigm. Josh Stanton and I were able to license the aforementioned entire James Clavell catalog (including his classic Asian Series featuring Sho-Gun) and Gregory McDonald’s catalog (Fletch and Flynn series) both of which I believe had been with Dell for many years but whose estates were looking for something different. Other authors who we have signed to do print and eBooks who have also been with major publishers are Sherilyn Kenyon, Heather Graham, Catherine Coulter, Rex Pickett, James Carroll, Peter Clines, Andrews & Wilson, PC & Kristin Cast, Josh Hood, a good part of the Leon Uris catalog, Gabriel Garcia Márquez, Neil deGrasse Tyson, Al Roker, Eric Rickstad, Brian Freeman, Adrian McKinty, Orson Scott Card, M.C. Beaton, Matthew Mather, Don Winslow, Shelley Shepherd Gray, Catherine Ryan Howard, The Black Berets series and quite a few others.

I think that many people are starting to realize that we are expanding well beyond the role of a traditional publisher and that we are looking at what tomorrow’s successful media/publishing companies will be like and look like, rather than the traditional way of doing things. Hopefully, we have taken the best time-honored industry practices and augmented them with newer ways of looking at what a publisher can and should do. As an example, we have a head of film/tv who got deals for eight of our books within the last three months.

DB: Please describe a day in the life of Head of New Business Development.

RB: Fortunately, because it keeps my business life interesting, there have been many different things I’ve done in that role. I’ve bought other companies for Blackstone (such as the direct-to-consumer company, Audio Editions), licensed our technology to other audiobook companies, arranged distribution deals with other publishers, made introductions between Blackstone and high-profile tech and content companies, I am on Blackstone’s Board of Directors, I put together the relationship between Blackstone and the Oregon Shakespeare Festival which resulted in Grammy-winning audio versions of their Shakespeare plays, I co-created a series of books by Native American elders to preserve their wisdom, humor and teachings.

In short, I have had my fingers in a lot of different pies and strive to be one of the people at the company who keeps Blackstone moving forward as well as in new directions.

DB: What specifically captures your attention when you review submissions?

RB: Since the majority of the acquisitions work that I’ve been doing lately has been more focused on celebrities, best-selling authors and hit catalogs, rather than on debut authors, I look for different things now than I did when I was evaluating day-to-day acquisitions. When I did that, I would look to see if the synopsis intrigued me, if I thought the story was something that the public would be interested in, what the author’s background, social media involvement and overall commitment to being a writer were, and what our sales and marketing people thought they could do with the book. And, of course, finally, was the writing any good?

For an author who wants to submit a query to an agent or a publisher (and submitting to an agent is probably a way lot easier than submitting directly to a publisher) they should make sure to know something about each person they are submitting to so they can personalize each letter/email. The author has to make sure the genre they are submitting is a genre the agent or publisher works in. The query letter should also contain a short, but effective, synopsis of the story, the author’s bio, comps to other books, anyone they could get to endorse the book who would be meaningful, and, if possible, something that perks the reader’s interest and sets the query letter apart from the hundreds of others that the agent/publisher has received.

DB: Tell us about your own writing.

RB: When I was twelve, I hammered out the first two-page sports newspaper that I wrote on my old Royal manual typewriter and sold the two carbon copies I made of it to neighbors. Over the decades since that time, I have written multiple newspaper columns, magazine columns and articles (including cover stories), blogs, copy for a local political committee and candidates, contributed chapters to two anthologies of short stories, and have written six, as yet unpublished and unproduced books and plays, and a rock opera.

My “breakthrough” came when I wrote Pignon Scorbion & the Barbershop Detectives, an historical fiction mystery novel set in the countryside town of Haxford, England in 1910. It will be published in hardcover by Blackstone on February 8, 2022. An eccentric, but gifted police inspector named Pignon Scorbion, who possesses the skills of Poirot and Holmes, comes to Haxford to head its law enforcement. Through a prior friendship with the town’s barber, Scorbion begins solving his cases in the barbershop assisted by a colorful group of amateur sleuth assistants – the barbers, the shoeshine man, a young reporter, and a beautiful and brilliant, female bookshop owner who is more than a match for Scorbion in observation, deduction and brains.

Scorbion’s ‘universe’ includes Sherlock Holmes, Hercule Poirot and Dr. John Watson, with whom Scorbion has become friends, and I’ve written the book in the style of the authors of that time and genre.

DB: What’s in the future for author Rick Bleiweiss?

RB: I’ve completed writing over 95% of Pignon Scorbion & the Barbershop Detectives, Book 2 which I believe will be published in early 2023. Without spoiling anything, it contains a case about a man who is shot and killed by an arrow while riding alone in a hot air balloon, another about the shoeshine man’s visiting cousin who is attacked and brutally beaten, a third involving a blacksmith who is murdered while walking home in the early morning, and lastly, a moneylender who is poisoned and dies in one of the barber’s chairs.

I also have a piece in an anthology of mystery short stories called Hotel California that is publishing in May, 2022. I join some real heavyweights in the book including Heather Graham, Andrew Child (who has contributed a new Jack Reacher story to the anthology), Amanda Flower, Reed Farrel Coleman, John Gilstrap, Jennifer Dornbush, and Don Bruns, all of whom have written new stories for the volume.

My story is about a premier NYC hitman named Walker who escapes a hit on his life and hides out in Maui while another hitman is sent to finish him off. It’s a cat and mouse game of who gets who.

I also will have another Walker story in the follow-up anthology, Thriller, due in mid-2023.

Lastly, at least for now, in January I have stories being published in Strand Magazine detailing a lot of the research I did for the Scorbion book, and another in Crime Reads Magazine in which I talk in depth about my favorite all-time mystery authors.

DB: Is there anything else you’d like to add?

RB: We are launching Scorbion in a somewhat unconventional manner. There is a Pignon Scorbion ‘Find the Hidden Objects” video game that will be available for free on the Apple and Android app stores. It will have six levels based on scenes in the book, but you will have to input an unlock code to play the last two – and that code is in the book and the audiobook. Shane Salerno of the Story Factory made a wonderful video trailer for the book, there will be retail display contests, we are making and will be selling Scorbion t-shirts, the book has already been voted the Buzz Book of the Pacific Northwest Booksellers Assn’s fall conference, has been featured multiple times in Publishers Weekly (including an excellent review), will be featured by BookBub on publication date, I am hosting a YouTube show interviewing authors and literary agents as they talk about their careers and give advice to aspiring authors, and we are going to make a strong media push hoping to get what I’m doing at 77 years of age as an example to other seniors that you are never too old to try something new or follow your dreams.

Thank you, Rick, for joining us at The Kill Zone. Best of luck with the February 2022 launch of Pignon Scorbion & The Barbershop Detectives! 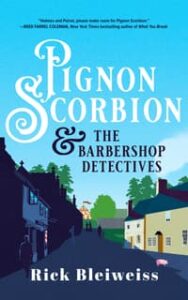