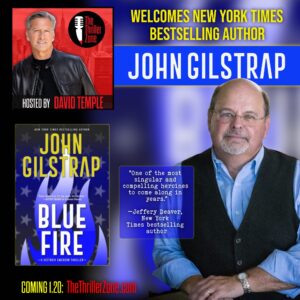 Last week, I had the honor of spending an hour or so with David Temple on his excellent podcast, The Thriller Zone. We talked about everything from the proper structure of a Martini to my approach to researching an writing my books. The timing of the interview had everything to do with the impending release of Blue Fire, the second entry in my new Victoria Emerson thriller series. For those who are unfamiliar with the series, this is a significant departure from other books I’ve written. It’s set in the aftermath of a nuclear war that lasted only eight hours and destroyed everything that we recognize as modern civilization. While hundreds of million people died in the holocaust, hundreds of millions survived. Among them is Victoria Emerson and her family. Victoria is a natural leader who unwittingly and unknowingly becomes the leader of people turn to in order to stitch society back together.

Like its predecessor in the series, Crimson Phoenix, Blue Fire imagines a world where precious few are prepared to last even a few days without supermarkets, gasoline, or electricity. As panic blooms, those who are even moderately prepared will sooner or later have to interact with those who are not. One needn’t think past the furious fight over hand sanitizer and paper products in the early days of the pandemic to imagine what would happen if life-saving medications and drinking water became scarce.

During the podcast, David Temple asked me how much my research for the series affected my own worldview on matters of survival. As we discussed this, I realized that I had stumbled upon the topic for my next Killzone post.

A Plan is the Antidote to Panic

My research didn’t change my outlook as much as it did reinforce it. I have always believed in preparedness, from filled and charged fire extinguishers and operable smoke detectors to proper flammable liquid storage to really good locks on the doors. My freezers hold weeks’ worth of food, and the emergency generator should ensure that it doesn’t crap out when I need it most. I carry a trauma kit in my car–two of them, actually, but that’s a long story–and I’m blessed to know how to use it. (Alas, if I’m the one who needs the treatment, things get a little complicated.)

Being prepared at home is easy. It just requires a little forethought and some inexpensive purchases. The real exposures we face every day are focused outside of the home. As crime soars and police departments contract, it doesn’t take a lot of imagination to see the potential for bad things happening to us good people.

Now, I’m not gong to suggest that everyone wander around packing heat (though I don’t think it’s a bad idea if you can do so legally), but I do recommend that everybody focus on being aware of their surroundings and to work with their loved ones on some basic universally-applicable planning. Whether it’s an active shooter or an earthquake, a plan goes a long way toward staving off panic.

It’s unsettling how many victims of crime and even natural disasters testify after the fact that they kinda knew something was going to happen before it did, but for any number of reasons didn’t act on their instincts. That group on the corner that makes you nervous? Avoid them. If your decision hurts their feelings, that’s their problem, not yours.

When you walk into a café or a theater or any other place that feels like a firetrap it most likely feels that way because it is, indeed, a firetrap. Turn around and go somewhere else.

When a crowd feels wrong–people are yelling at each other, or people start pushing each other–leave. Don’t check it out, don’t play peacemaker. It ain’t your problem (yet) and you don’t want that to change. Every fight you walk away from before it starts is a victory.

Know Where Two Exits Are

This one has been instinctive for me for decades. I always know the way out of a place before I settle into it. When I stay at a hotel, not only do I know where the exits are, but I know how many doorways there are between my room and it, because zero visibility is a given in a structure fire.

In a restaurant or a movie theater or other public spaces, not only do I know where the exits are, but I also have a plan for which one to use. As a general rule, the main entrance is a mistake. If a fire breaks out, or some asshat opens up with a firearm, that’s where everyone else is going to go. People get crushed in the panic, and the logjam at the door presents a bad guy with the mother of all target opportunities. Back doors can be problematic, too, because of the ridiculous security locks that don’t open right away. While I understand the desire to not have customers sneak away without paying, I’m shocked that they are legal. Even fifteen seconds is an eternity when fire is banking down on you.

Remember: In a pinch, glass breaks and drywall is frangible. “Exit” doesn’t necessarily equate to “door”.

Whether it’s a lion in the Serengeti or a mugger in a mall parking lot, predators like easy prey. Security experts all agree that one of the best ways to keep the focus off of you is to remain fully in the moment and aware of your surroundings. Instead of reading texts while you walk, or instead of listening to a podcast, walk with your head up and notice things. That simple action alone may be enough to make a potential attacker turn his attention to a different victim–probably one who’s reading texts while listening to a podcast.

A couple of Christmases ago, I was leaving a mall store on my way to my car. It was nighttime, and there weren’t many people around except for a young lady walking ahead of me. It was cold, and I wanted to get to my car, so I was walking faster than she and the distance between us closed. I was still probably ten yards behind her when she whirled and said quite loudly, “You’re making me nervous. Would you mind not passing me?”

A bit stunned, I saw right away that she had every reason to be unnerved. I apologized and did my best to reassure her that I was not a threat–but of course that’s exactly what a bad guy would say. I stood still and let her get a ten-second head start and then walked on more slowly. Good for her!

That scene–or one very similar to it–made into one of my books.

That dismal bit of advice is exactly what I taught my son when he was little, during the stranger-danger years. Kick, scream, bite, throw elbows and tear out eyes when someone grabs you. Once someone places hands on you, they have declared their intent to commit a capital crime against you. Make them pay. The worst they can do is kill you, and that’s what they’re likely intending to do anyway.

Your single goal in that moment should be to end the fight. If you can do it by running away, that’s a win. You don’t have to render the attacker unconscious, you just have get enough distance between you to either get to safety or to make him change his mind.

I’m not sure if this really long post did anything to help people develop their writing skills, but I’m hoping there is some relevance to character development. Your fictional creations don’t have to have exceptional skills to survive in a crisis. They don’t need to have freezers full of food (though it’s not a bad idea), and they don’t have to learn ground fighting skills (again, not a bad idea). All they need to do is keep their head about them.

36 thoughts on “Are You Prepared?”