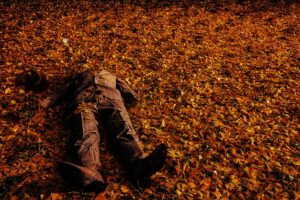 A recent conversation with my husband brought up two important points for writers to keep in mind. Rather than tell you, I’ll peel back the veil and let you eavesdrop.

Me: Studying forensic taphonomy. I’ve been dyin’ to dig into this field and finally gotta reason. Exciting, right?

Bob: Forensic taphonomy? Oh, sure, I know all about it. Are you just researching that now? I’ve known about it for years.

Bob: Lemme ask ya this. Why are you studying forensic whatever-it’s-called?

Me: Forensic taphonomy. Well, I need to know it for a new character— Actually, the character’s an anthropologist, but y’know, since we only have one in the state, she delves into forensic taphonomy and forensic archaeology, as well. That part’s true, by the way, not fiction. We really do only have one forensic anthropologist in New Hampshire. Imagine how overworked she is? Anyway, since I needed to learn the field, I figured I’d write a post about it for TKZ. Y’know, two birds, one stone type o’ thing.

Me: Okay. Forensic taphonomy is the study of what happens to the human body after death. Specifically, how organisms decay and/or fossilize when exposed to the elements or in clandestine graves. Most of what happens to the body (and evidence) at an outdoor crime scene is the result of alteration or modification by natural agents, such as plants, animals, insects, soils, environment, gravity, and a whole range of environmental, climatic, and biotic factors.

The recognition and documentation of the specific role played by each of these natural agents becomes critical to understanding why evidence ends up where it does and why it looks the way it looks. By focusing on unusual patterns of dispersal and/or removal of evidence and/or remains, it shows investigators where or if human intervention occurred. (e.g., moving/removing remains to hide evidence).

Bob: Does it matter? You lost your audience.

Me: Oh. *pause* But forensic taphonomy’s a fascinating field.

Bob: For you, maybe.

Me: Since when is decomposition not fascinating? I thought you and I lived on the same page.

Bob: Honey, we do, but your audience may not appreciate your fascination with decomp and death like I do.

Bob: What’re you gonna write about?

Me: I dunno now. You ruined it.

Bob: You may wanna rethink that character, too.

Me: Why are you in my office?

Sadly, he’s not wrong. When I read the post aloud it sounded dry. He wasn’t right about the character, though. I need her—she plays a vital role in the plot—but I may have gotten a bit overeager with my research. And you guys almost ended up with a 1500-word post about forensic taphonomy to read with your morning coffee/tea.

This conversation raises two important points. Did you catch them already?

#1: For what reasons do we create secondary characters?

Just because the plot may not revolve around a secondary character doesn’t mean their role is less important. After all, they’re still human with hopes and wants and dreams and fears and flaws like the rest of us. The story will be more interesting if our secondary characters are working toward their goals alongside the main characters.

While crafting a new secondary character, don’t get hung up on what they look like, unless their appearance adds to their characterization. For example, a depressed character might wear baggy lounge wear that’s two sizes too big, never wear makeup, or even bother to brush their hair.

What matters most is their role in the story, their association with the main players, and how they work with—or against—the protagonist. Once we nail down their role, we can flesh them out with personality traits that complement or contrast with the key players.

#2: Always keep the reader in mind.

Yes, we’ve all heard the speech: Write for you and you alone.

While it’s true on a certain level, writing is also a business. For those who don’t care if anyone ever reads their work, it’s a hobby. In which case, they probably don’t care much about craft, either. Serious writers keep audience expectations in mind. We care about delivering a visceral thrill ride each and every time. Which is not the same as writing for money or some crazy get-rich-quick scheme. If that’s the goal, find another profession.

One more matter needs to be discussed, a matter that bears directly on that life-changer and one that I’ve touched on already, but indirectly. Now I’d like to face it head-on. It’s a question that people ask in different ways—sometimes it comes out polite and sometimes it comes out rough, but it always amounts to the same: Do you do it for the money, honey?

The answer is no. Don’t now and never did. Yes, I’ve made a great deal of dough from my fiction, but I never set a single word down on paper with the thought of being paid for it. I have done some work as favors for friends—logrolling is the slang term for it—but at the very worst, you’d have to call that a crude kind of barter. I have written because it fulfilled me. Maybe it paid off the mortgage on the house and got the kids through college, but those things were on the side—I did it for the buzz. I did it for the pure joy of the thing. And if you can do it for joy, you can do it forever.

TKZers, care to share your favorite secondary character? S/he can be a character you created or one you read about. 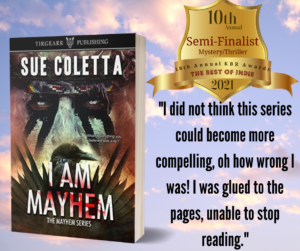 I AM MAYHEM is a semi-finalist in the 2021 Kindle Book Review Awards. Fingers crossed for the next round!