Debbie also wrote “nigerian prince” in that post. That got me thinking of a piece I wrote some time ago on my blog. It’s titled How to Scam Nigerian Funds for Your Time Machine.

I’m a serious writer (nah, not.) and delve into darkness depths with psychotic characters, crime scenes you can smell through the words, forensic fluids that drip off the page so shouldn’t be read in bed, and nothing-good-will-come-of-these plots. But I know a good writer is a rounded writer, and I welcomed the chance to do a little humor when I got another of “those emails”. Here’s the DyingWords post: 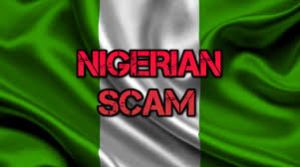 “If you don’t know about Nigerian scams, then you’ve probably never used the internet. Seems like every couple weeks these West-African crooks drop me an email thinking I’m dumb enough to bite. Some people must, or the cons wouldn’t keep trying. So it was no surprise when I checked my inbox Tuesday morning and found another Nigerian grab at my wallet.

But it was different this round. For a change, I had little on my plate and time on my hands, so I decided to turn the tide on this guy. Here’s what “Mr. Martins Logan Scott” from Nigeria wrote me. Then I’ll show you my reply. 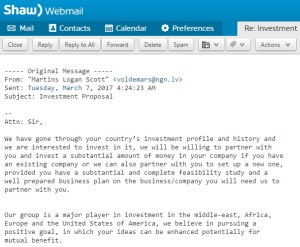 Our group is a major player in investment in the middle east, Africa and the United States of America, we believe in pursuing a positive goal, in which your ideas can be enhanced potentially for mutual benefit.

As we seek new frontier and opportunities, we look forward to partner with you. Your prompt reply will be most welcome. 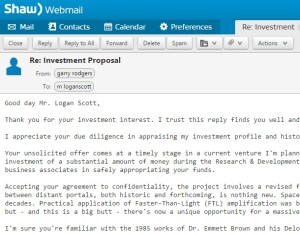 Thank you for your investment interest. I trust this reply finds you well and in accordance with the situation.

I appreciate your due diligence in appraising my investment profile and history. That is the primary mark of a careful and prudent investor as I’m sure you and the major players in your group are.

Your unsolicited offer comes at a timely stage in a current venture I’m working on. I was planning to release investment offerings by-invitation-only prior to a NYSE IPO. However, I’m open to prioritizing your group’s investment of a substantial amount of money during my project’s Research & Development (R&D) stage. Therefore, I’d be pleased to accommodate you and your esteemed business associates in safely appropriating your funds.

With an understanding of your agreement to confidentiality, my project involves a revised form of hyper-velocity, multi-directional transportation. The concept for analogous movement between distant portals, both historic and forthcoming, is nothing new. Space-time dilation based on the Einstein-Rosen bridge theory has been conceptualized for decades. Practical application of Faster-Than-Light (FTL) amplification was bottlenecked due to tachyon condensation which restricted Portal Entrance and Exit (PEE), but there’s now a clear and unique opportunity for a massive breakthrough. 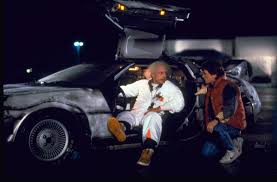 I’m sure you’re familiar with the 1985 works of Professor Emeritus Dr. Emmett Brown and his DeLorean model. Unfortunately, it’s been three decades, going on four, since Doc vanished in a timely experiment. Although I patiently await his return, progress must move forward. With this, I’ve acquired Doc’s patent rights to the Flux Capacitor (FC) – the propulsion device central to warping the Space-Time Continuum (STC). Early technology restricted FC Input/Output (I/O) to 1.21 jigawatts, however… I’ve found a method of quadrupling I/O to 4.84 jigawatts, theoretically making the trip four times faster. 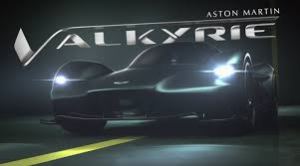 Compounding the situation is the original 1.21 jigawatt FC only required an 88 mph ERV. With a four-times capacity 4.84 jigawatt FC, it’s boosted the ERV to 352 mph. I realized… Great Scott! That’s a lot of ground speed. Fortunately, I’ve identified the new Aston Martin AM RB-001 Valkyrie as the perfect design. Now—here’s where you come in.

As you know, the Valkyrie is a highly advanced work of technology and produced in 25 unit allotments. I’ve placed an order for one Valkyrie to be refitted as a PEE vehicle, however, the Aston Martin Corporation requires pre-payment in full. With your timely offer of substantial investment capital, in return, I’m offering you the exclusive opportunity to fund my Valkyrie acquisition as the PEE vehicle of choice. It’s noble you believe in pursuing a positive goal and ideas than can be enhanced potentially for our mutual benefit. 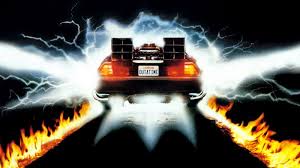 Appreciatively, I’m accepting your group’s investment of $3.12 million USD. This covers the Valkyrie purchase, shipping, and handling. Please make an immediate monetary transfer via Western Union for deposit into my account #6105-883-464-0901 at Nanaimo, British Columbia, Canada. In lieu of cash, your direct purchase of the AM RB-001 PEE Valkyrie can be delivered to my Vancouver Island R&D facility.

Thank you for your generous offer, Mr. Logan Scott. Once my project is operational, I confidently assure your investment will be returned to you, along with accrued interest, to any point you prescribe in time. Your prompt reply will be most welcome.

I’ve yet to hear from Mr. Martins Logan Scott, but I trust he’ll be back in the future.

How about you Kill Zoners? Ever written a piece on a whim and were silly enough to send it? Let’s hear other experiences!

36 thoughts on “Scamming Nigerian Funds to Build Your Time Machine”